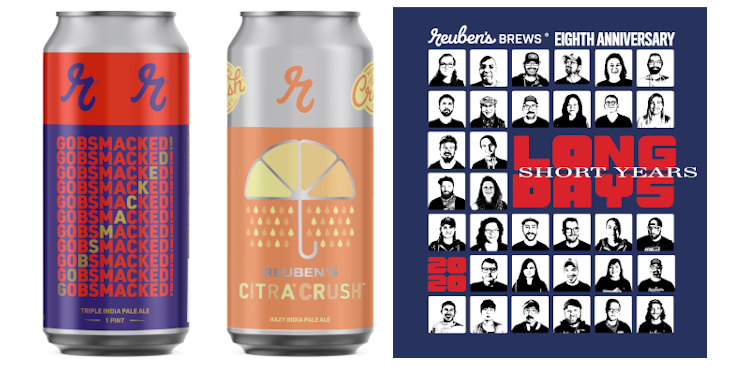 While it may seem like time stood still for the past six months because of the pandemic, the last eight years whizzed by like a bullet train. Next week, Reuben’s Brews celebrates its eighth anniversary, though the celebration will not include the same kind of crowds as years past.

But before we get there, this week Reuben’s Brews releases two beers: Gobsmacked Triple IPA and Citra Crush Hazy IPA. Here’s more info about the beers and the anniversary straight from the source:

Gobsmacked, one of our original Triple IPAs, is returning in cans this week to The Taproom and To-Go Store this Wednesday at Noon. This 10.5% Triple West Coast IPA was first brewed for Brouwer’s Cafe’s 10th anniversary. Peach notes in the nose, with a cane sugar sweetness in support. Tangerine comes through in the mid palette, with grapefruit on the back end. A smooth, soft and juicy body provides balance in the finish.

We will also have Reuben’s Citra Crush the latest release in our Reuben’s Crush series of hazy IPAs. This beer, of course, prominently features Citra hops atop a smooth hazy body. Available Wednesday in the Taproom and To-Go Store and in distribution around the Pacific Northwest beginning later this week.

Long Days, Short Years will be available at The Taproom and To-Go Store, as well as in distribution around the Pacific Northwest.