Two Beer Brewing is giving back to the community. Cheers to Two Beers, we love it when members of the local brewing community step up like this. Here’s the message they posted on Facebook today, along with the video (which is very well done, I might add).

For every keg delivered in the month of January we will be giving back 8% of our profits to one of four charities. Please spread the word and drink with a cause this January. And we hope that you join us in giving back in 2011.

This Saturday (July 25th) Two Beers Brewing will celebrate the grand opening of their new brewery and tasting room in south Seattle. The event runs from 2:00 – 8:00 and will feature bbq food, live music, games and give-aways.  The location can be described accurately as either Georgetown or SODO. Since it is south of the West Seattle bridge, I’m going with Georgetown. I stopped by recently to check out the new digs and give you a bit of a preview.

For those of you who do not know, Two Beer Brewing is the latest brewery to make the leap from “nano brewery” to full-fledged craft brewery.

The old warehouses along Ohio Avenue South have been remodeled in recent years and converted into light industrial units. What was likely one huge warehouse has been subdivided into portions perfectly sized for businesses like Two Beers. They’re clean, painted and pretty. I suppose you could say that this strip of businesses is yet another sign of the sometimes mythical and sometimes real Georgetown Renaissance. Whatever the case, this stretch of Ohio Ave. seems to be a vibrant little community of businesses. 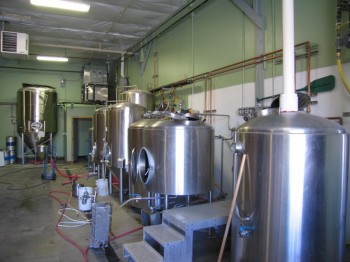 Opening the brewery’s garage door, you’ll find a nice bar with seating for six or eight people. The barback is constructed from reclaimed lumber. The bartop is constructed from remnants of the old gymnasium floor at Concrete Middle School. There are also a few four-top tables and a flat-panel TV. “Beer, peanuts and pretzels,” says Joel Vandenbrink, brewmaster and proprietor at Two Beers Brewing. “People love pretzels.”

“And beer,” I add. The initial plan will be to open the tasting room on Thursdays and Fridays from 3:00-7:00. The brewery/tasting room will also be available for private parties and special events. It seems to be a trend lately — to have the tasting room actually in the brewery, with very little separation between the brewing and the drinking of the beer. Joel intends to construct something vaguely resembling a wall, or partition, to meet the codes that require a boundary between the bar and the brewery.

Joel shows me a blue bottle with some English and some Japanese Kanji characters on the label. I recognize the words Pale Ale. The 7 barrel brewhouse came from California by way of Japan. Apparently they sent along a bottle of their beer with the brewing equipment. Talking about the blue bottle beer, Joel says, “It wasn’t good. No wonder they went out of business.”

Joel has a trio of 7 barrel fermenters that have been in storage recently but previously belonged to Dick’s Brewing in Centrailia. There is also a 30 barrel fermenter that came from Georgetown Brewing. This is all a big step up in the world for Joel, who was producing beer on a .75 barrel pilot system previously. He reports that the transition to the larger system has been fairly seamless. “The first batch I brewed on this system was my Echo IPA,” Joel says, “I was amazed that it turned out so well.”

The address of the new Two Beer Brewery is 4700 Ohio Ave. South, Seattle, WA 98134 (Map it).  Ohio Avenue South is between 1st Ave. and East Marginal Way, just north of Hudson Street. How you get there really depends on where you’re coming from.

Here’s a link to a cool video that Joel had made showcasing the new brewery and inviting you to the party.