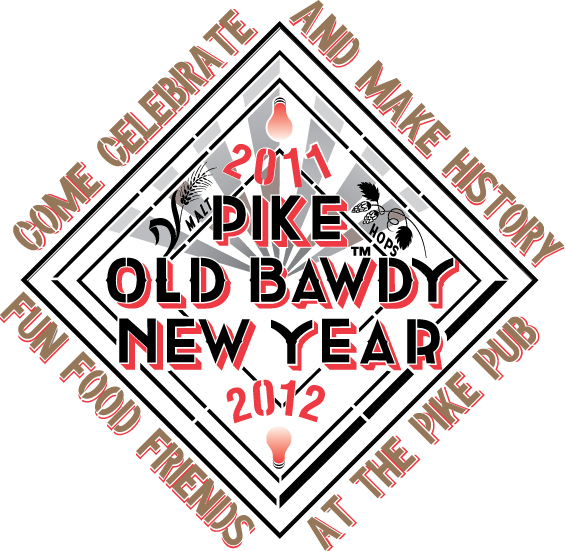 Pike Brewing has announced three big events at the Seattle pub. It all begins with a celebration to ring in the new year. The second event celebrates the old: Old Bawdy Barleywine, that is. Finally, the annual Chocofest, which is held just before Valentine’s Day, has grown like the Grinch’s heart.

The New Year’s Eve party includes an optional beer pairing dinner that sounds amazing. The Old Bawdy vertical tasting event offers samples of beer dating back to 2006. The Chocofest has really grown up this year, offering more beer, food, chocolate and vendors. We share details about all three events below.

Make history, eat like King Gambrinus and be the first to taste the 2011 vintage of Old Bawdy Barleywine. The Pike Pub will be decked out in its holiday best for a picture perfect New Year’s Eve Dinner. The pub will remain open until 1:00 a.m. Details below.

FOREPLAY BEFORE THE BIG DAY: On February 12, 2012 Pike again gathers together top producers of beer, wine, spirits, and mead, along with select local restaurants and specialty food producers, to make ChocoFest 2012 the best ever. We will feature local producers, and for the sake of comparison, represent some of the best imported, too. This year we will open up the brewery, one floor below the Pike Pub, in order to accommodate greater numbers of enthusiasts.

BENEFIT FOR FARESTART: Proceeds from the event will benefit FareStart, a culinary job training and placement program for homeless and disadvantaged individuals. Over the past 19 years, FareStart has provided opportunities for nearly 5,000 people to transform their lives, while also serving over 4.5 million meals to disadvantaged men, women, and children.

CHOCOBREW FEST: We are inviting local breweries to brew and serve their own versions of beer made with chocolate. Pike will offer XXXX Cocoa Cherry Porter, specially brewed for the occasion in our new pilot brewery.

WINE, SPIRITS, MEAD, CIDER, RESTAURANTS, BAKERS, and CHEESE MAKERS: We have invited more wineries, distilleries, and cider makers, and even a meadery, along with restaurants, bakers and artisan cheese makers, in order to make 2012 Chocofest the best ever.

A SWEET HISTORY: Our goal from the beginning has been to expose food lovers to the natural harmony of chocolate and beer. Many people are unaware of this exquisite combination, and there’s no better time to expose them to it than around Valentine’s Day. Wine marketers first promoted chocolate and wine many years ago, so there is often more awareness of this pairing. Spirits, too, marry beautifully with chocolate, but until recently, we had but a few local spirit producers. With a substantial local chocolate culture and an abundance of great breweries, wineries, distilleries, and even a meadery, in 2008 we decided to have a festival. Pike ChocoFest was born and it was a hit from the very beginning.

Each year ChocoFest has had more participants, more guests, and has been more fun. The first year ChocoFest occupied only the two levels of our Museum Room, and in years two and three, in an effort to accommodate more guests and create better traffic flow, we added the Naughty Nellie Room, as well as our IPA level, to the event floor plan. This year we are including the Pike Brewery.

Pike ChocoFest is a great way to enjoy a romantic, delicious, and sensuous evening at Pike, and feel good about it! Plus some participating vendors will have products available for sale if you’re looking for the perfect valentine gift.

Click here to see some of the confirmed vendors.

OLD BAWDY CHEESECAKE
Can you imagine anything so rich and delicious as Rose Ann’s New York cheesecake recipe inspired by one that her parent’s hand carried back from their family visits to the lower East Side. Our variation incorporates the luscious underpinnings of aged Old Bawdy with this creamy, mouthwatering, soul satisfying dessert. Paired with samples of 2010 & 2011 Old Bawdy Barley Wine

The most popular breweries in the country and in each state
Liquor and Cannabis Board: Help for Licensees During COVID-19 Restrictions
Chainline Brewing offers free beer for local healthcare workers