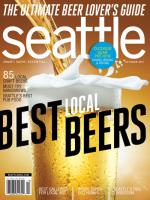 Have you seen the current (October) issue of Seattle Magazine? I am talking about the magazine named Seattle, not the similar publication with “Seattle” in the name. For October, Seattle Magazine decided to do a feature about the local beer scene: “An epic 24-page beer extravaganza,” as one Seattle Mag editor called it. The issue is easy to spot at the newstand. Featuring the words “Best Local Beer” emblazoned on across a picture of a foaming mug, it is very clearly the beer issue.

The November issue will be released very soon and the October issue with all its beautiful beer content will be nothing but a memory. Get a copy of the beer issue while they’re still on the shelves.

With or without my contribution, I am delighted that Seattle Magazine decided to do this feature. Seriously, beer usually gets no love from lifestyle publications like this. I give big kudos to the editorial team for having the vision to recognize that the local beer scene is a worthy subject.

A Different Audience for Craft Beer

Seattle Magazine reaches a different audience than this blog. The vast majority of the readers don’t know an IPA from an ESB. Seattle Mag readers are not typically the people you see lined up outside the Washington Cask Beer Festival two hours before it opens. They are not necessarily craft beer drinkers; however, they are definitely potential craft beer drinkers.

As beer lovers, we should hope to see the local craft beer industry grow and thrive. We should hope that our local brewers succeed. Craft beer is not a secret handshake. It is not a pleasure reserved for a select few. Just because you like it, that does not mean that you are better or smarter than anyone else. We are not snobs. Beer is inclusive, not exclusive.

At last reckoning, 25 percent of the beer consumed in the greater Seattle area is craft beer. That is the second highest percentage of any metropolitan area in the U.S.A. (Portland is first at 29 percent.) I want to see that number continue to grow. When a more-mainstream publication like Seattle Magazine provides this kind of coverage, it helps.

Most of the Seattle Magazine beer content is available online, but seeing it in print is much  more impressive. The photography is beautiful and the layout is superb. In particular, the pictures of the “Local Brewers You Need to Know” are pretty amazing. The one of Drew Cluley (Big Time Brewery) is actually quite freaky.

As for my part, the magazine’s editors did their jobs: they edited. Some stuff didn’t make it in. I apologize to the 141 Washington breweries that were not highlighted. This was a feature in a local lifestyle magazine. It was not the Washington Beer Atlas.

A Broader Reach Than Any Beer Blog or Beer Mag

I have real evidence, not just anecdotal evidence, that the Seattle Magazine beer issue is helping spread the good word about good beer.

A couple of weeks ago Kim and I were enjoying a beer in the Urban Beer Garden at Fremont Brewing. Typical for a Saturday afternoon, there were a lot of people lined up for pints and growlers. I noticed a group of three people in line, particularly a woman holding the Seattle Magazine beer issue. I introduced myself and asked her about it. They were visiting the breweries featured in the magazine. In fact, they’d just come from Black Raven and were trying to decide where to go next. They were wide-eyed and a bit giddy. This whole “brewery thing” was new to them.

I was recently at Trellis, the delicious restaurant in downtown Kirkland’s Heathman Hotel, to interview the Executive Chef. We were sharing a service elevator with a member of the hotel’s staff. She overheard part of our conversation. “You wrote the Seattle Magazine beer thing?” She asked. I confessed. “We put a copy in every room and our bartenders say that people have been asking for the beers you recommend.” Luckily for those thirsty hotel guests, the bar at Trellis has plenty of good beer on tap (that is why I was there talking to the chef).

Last Saturday, Kim and I were visiting Vino Bello wine bar in Burien for a wine tasting event. (I know, shocking.) Although I was there for wine, I could not help notice the bar’s two tap handles:  Breakaway IPA and American Blonde from American Brewing Company.

“How did you end up with both of your taps dedicated to ABC beers?” I asked. After all, at most wine bars I don’t expect to see such excellent beer (or draft beer at all, for that matter). It turns out that the bar owners happened to be in Edmonds a couple weeks ago and also happened to have a copy Seattle Magazine in the car. They consulted the beer issue to see if there was any good beer nearby, stopped by the Breakaway Room at American Brewing for a couple beers, enjoyed it very much, and a few days later called the brewery to order some beer.

I couldn’t help but ask how the beer was being received by the bar’s decidedly wine-centric patrons. “Are you kidding me?” Michele Smith, the owner at Vino Bello, told me. “People are freaking out about the beer, it’s so good.”

We beer lovers (that means you, dear reader) are deep in the middle of this thing: the craft beer explosion is not news to us. I am glad that Seattle Magazine recognized that the rest of the populace is on the outside looking in and wondering about craft beer. Reward Seattle Magazine for spreading the gospel. Pick up a copy of the October issue while you still can.

And if I am tooting my own horn, so be it. We all deserve to do that now and again.