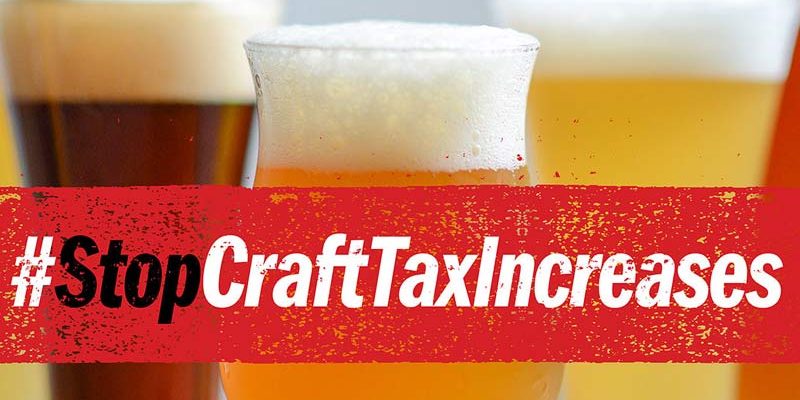 The nation’s small and independent breweries are asking for your help. At the end of this month, the Federal Excise Tax (FET) paid by breweries will drastically increase. For years now, the industry has been united in its efforts to rework the current excise tax structure and make it more equitable for the nation’s small, independent breweries — a segment of the beer industry that didn’t really exist when existing tax codes were written. For the past couple of years, the industry has enjoyed a temporary reduction in the FET rate, but that is set to expire at the end of this month.

Feel like you need to know more before you support this? Click here to learn more about this issue.

To show your support:

The easiest and fastest way to contact your members of Congress, assuming you know their names, is to simply call the U.S. Capitol switchboard and ask to speak to their office. You are asking your Senator/Representative to support the passage of the Craft Beverage Modernization and Tax Reform Act (HR 1175, S 362). Keep this page open so you have that name and those numbers handy.

Passing the Craft Beverage Modernization and Tax Reform Act will make permanent reforms enacted in 2017 that create a fair and equitable tax structure for brewers, winemakers, distillers, cider makers and importers of all beverage alcohol. The bill currently has 324 cosponsors in the House and 74 in the Senate.

Here is the press release from the Washington Brewers Guild

Seattle, WA • Dec. 5, 2019 –  In less than 30 days, the recalibrated Federal Excise Tax (FET) rate for over 400 small and independent breweries in Washington State will expire. These small businesses are asking Congress to prioritize and pass the Craft Beverage Modernization and Tax Reform Act or extend the current excise tax rates before Dec. 31. Since its enaction at the end of 2017, the reduced FET has enabled small and independent brewers across our state to re-invest in their business, hire new employees and grow their breweries.

“The Craft Beverage Modernization and Tax Reform Act has been crucial to the success of small and independent brewers in Washington and needs our full support,” said Annie McGrath, Executive Director of the Washington Brewers Guild. “The craft beer industry has experienced sustained growth in Washington and across the country and the current FET rate has gone a long way to empower our brewers to make significant investments into their businesses. Washington breweries provide over 6,300 jobs statewide and contribute $1.4 billion to Washington’s economy. Breweries operate in every state and nearly every congressional district in the country and if the current rate is allowed to expire, the tax increase may have a chilling effect on job creation.  America’s beer industry is one of the jewels of America’s manufacturing sector—supporting more than 2.1 million jobs – 559,545 of which come from the craft industry.”

The Craft Beverage Modernization and Tax Reform Act is uniquely bipartisan legislation, with support from more than half of the U.S. Congress. Recalibrated FET rates have saved the American craft brewing industry nearly $80 million annually and helped provided certainty and stability for more than 7,500 breweries across the country including over 400 in Washington State. If the legislation is not acted upon, not only will American and Washington brewers alike face a massive financial burden, but more than 2,000 new brewers who have only been in operation since Jan. 1, 2018 and who have never before paid the tax, will see a 100 percent tax increase.

About the Washington Brewers Guild

The WBG works to unite WA craft brewers and provide a strong and effective voice for the industry to the Legislature and other critical policy-making entities.  The WBG provides support to its member breweries by helping brewers navigate state beer laws, providing education forums on issues of interest and importance to WA brewers and connecting brewers with fellow brewers and beer industry suppliers.

The WBG produces two festivals annually: Cask Beer Festival in March and Winter Beer Festival in December.  Both are can’t-miss events for WA beer lovers.  Festivalgoers can feel good knowing that all proceeds from these events go directly to support the WA brewing community.