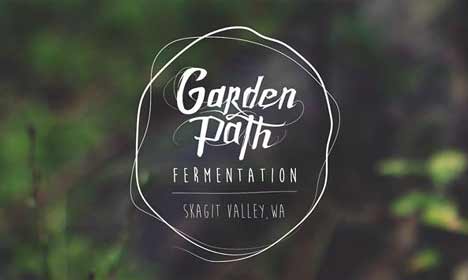 The folks from Garden Path Fermentation of Burlington, Washington visits The Beer Junction in West Seattle tonight (Thursday, April 18) and they’re bringing an assortment of beers (and a mead) for your tasting pleasure. In its year of existence, this brewery has quickly gained notoriety for its wild-fermented beers.

Garden Path Fermentation is a bit different. Unlike most breweries, the beers are fermented in a koelschip using their “native yeast culture cultivated from the air, flowers, and fruits of the Skagit Valley.” Everything they do is aged in oak barrels or oak foeders.

See what I mean? Even the words are different.

As much as possible, Garden Path uses ingredients sourced from the Skagit Valley. In addition to beer, they make mead and intend to eventually release some cider and wine. Thus, the word brewing does not appear in their name because the endeavor involves more than beer.

Ron and Amber, the owners of Garden Path Fermentation, previously worked at Jester King Brewery in Austin, Texas. That brewery is familiar to people who enthusiastically enjoy wild-fermented, mixed-culture, and sour beers. Ron and Amber are fonts of knowledge when it comes to this kind of beer, so don’t be afraid to ask questions like, “What’s a foeder (pronounced fooder)?” and “What’s a koelschip (pronounced coolship)?

Garden Path Fermentation Tasting Event
Thursday, April 18th (6-8PM)
(Try all five of the below from 6-8PM for just $5!)

1. THE PATIENT FISH THE SEA: Amber-colored barrel blend, inoculated with some of our funkier house yeast before bottle conditioning. (6.4%)

4. THE EASYGOING DRINK: Lightly tart and barnyardy, delicately hopped ale, fermented in a foudre, aged in oak and stainless.  (4.4%)

Liquor and Cannabis Board: Help for Licensees During COVID-19 Restrictions
Top 100 breweries in Washington by production volume 2019
Peddler Brewing's 7th Anniversary and the enduring humanity of craft beer