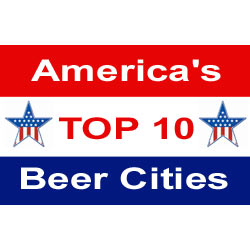 Portland is the top beer city in America, Seattle is second, with San Francisco and San Diego not far behind. It’s a fact. Deal with it.

Everybody loves, or hates, a top 10 list, especially when it has to do with the top 10 beer cities in America. Lists are all the rage these days. That’s largely because of all the rage they incite these days. People get positively red-faced if their hometown is not on the list.

Most of these kinds of lists are simply based on someone’s opinion. Take it with a grain of salt and don’t let it boil your barleywine. Then again, some lists are based on real empirical evidence, like the list below.

The following cities lead the nation in terms of craft beer sales in grocery stores. These numbers come from Nielsen Scantrack and are based on the 52-week period ending on 12/27/14. In other words, 2014.

Other impressive cities (runners up):