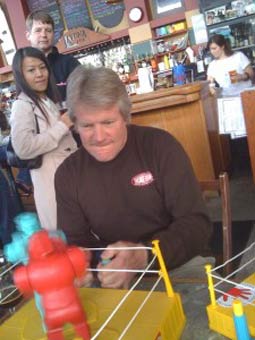 Pictured at right, Dick Cantwell playing Rock ‘Em Sock ‘Em Robots. This was the most-viewed picture on the Washington Beer Blog in 2015. Can you guess the story with which it was associated?

Below we list the top ten stories of 2015, as well as the top brewery openings of the year.

All 1.5 million words are still out there, so people often stumble across stories in our archives when using Google to search for beer-related information. That’s why our list of top stories is usually a mix of the old and the new. Usually more new than old, but it’s always interesting to see what interested people on the worldwide web.

Speaking of archives, check out the very first post we ever published here (October 11, 2008). It’s a bitter sweet story, sadly prophetic in the face of all that happened in 2015.

Below is the list of the Washington Beer Blog’s most-viewed stories of 2015. Most of them are from this year. Some of them are from the archives but still manage to maintain their relevance in 2015. This list is based on real web stats; it is not a matter of opinion.

Top Brewery Openings (as reported and viewed on the blog)

Again, based on web stats and not my opinion. Ghostfish Brewing, mentioned above, was the top “new brewery” story of the year. Here are the others.