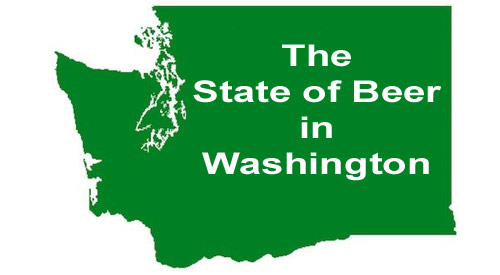 For the first time since 2009, Washington beer production decreased last year, from 630,000 barrels in 2016 to 587,000 barrels in 2017. That’s a net loss of about 7 percent in just one year. I reported this a couple weeks ago (read it), with the assurance that this does not mean that the sky is falling. If you think the sky is falling, you should not use this as proof.

For the uninitiated, beer is measured in barrels. A barrel of beer is equal 31 gallons. In general, think of one barrel as two full-size kegs.

In 2016, Washington breweries produced 43,000 fewer barrels of beer. This drop is related almost entirely to Redhook Brewery shutting down its Woodinville brewery. In 2016 Redhook produced 81,000 barrels in Washington. In 2017, only about 20,000 barrels (a 61,000 barrel drop, approximately). This doesn’t include the small amount of beer brewed at the new Redhook Brewlab in Seattle, which opened last August and produced 348 barrels in 2017. The Woodinville facility was capable of producing well over 200,000 barrels per year, and a few years ago it neared capacity. Now it produces zero barrels.

If you remove Redhook Brewery from the Washington beer equation, Washington produced more beer in 2017 than it did the previous year. I know that many of you removed Redhook from the Washington beer equation years ago because of its involvement with Anheuser-Busch, so you are not exactly in mourning. As it had planned to do for years, Redhook moved all of its production to the big CBA facility in Portland; it had nothing to do with a bubble bursting or the industry collapsing. Business, that’s all. 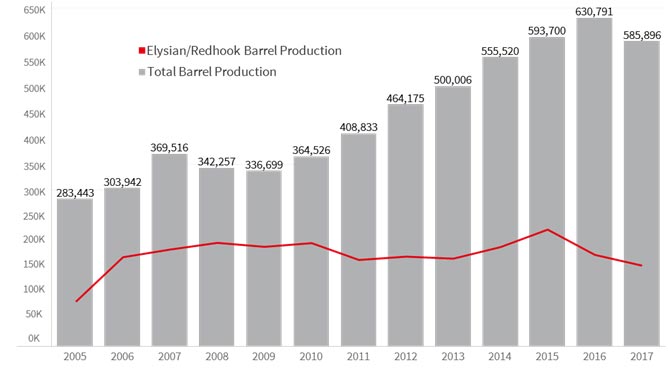 So, in 2017 Washington produced 43,000 fewer barrels of beer overall, but Redhook and Elysian combined to account for an 86,000 barrel reduction on their own.

The only other notable brewery in the state that realized a significant reduction was Mac and Jack’s Brewery, which was down from 43,000 barrels in 2016 to 38,000 barrels in 2017.  I don’t have an explanation for the reduction, except that maybe it had something to do with the fact that the brewery recently changed the style of keg in which it provides the beer. I won’t presume to know how it played out when the brewery switched from a less-common type of keg to a very standard kind of keg.

Only 10 breweries in Washington produced more than 10,000 barrels in 2017. That’s only true if you remove Redhook from the equation, which kind of makes sense since we know for a fact that their production will drop so vastly with the closure of the brewery in Woodinville. It’s unlikely that the Redhook Brewlab will produce (by design) enough beer to make the top 10 — it is intended to be a test brewery that produces smaller quantities of beer.

Here are the top 25 Washington breweries, by production volume:

I want to reiterate that Redhook is not included in the above lists by design.

There are a few things to note about those lists.

In 2017 Georgetown Brewing increased production from about 55,000 barrels to about 65,000 barrels. Fremont Brewing was another big mover in 2017, with an increase of nearly 13,000 barrels over the previous year.

While it currently reigns as the state’s largest independent brewery, Georgetown Brewing is still quite small in terms of the national picture. They are not even in the top 50 in terms of barrel production.

In Washington, we have a lot of breweries but no really big breweries. For comparison sake, in 2016 Sierra Nevada Brewing produced 1.1 million barrels, more than twice as much as the entire state of Washington. Same year, Bell’s Brewery produced over 424,000 barrels, Deschutes Brewery over 350,000 barrels, and Alaskan Brewing over 150,000 barrels.

Only a couple states have more breweries than we do: California and Colorado. I think those numbers are still true, but it’s a moving target. With over 6,000 breweries in America these days and, literally, at least one new brewery opening every day, it’s hard to keep track.

What Does All of This Mean?

A lot of people are speculating about the future of the beer business. Some things are blatantly obvious, like the fact that there is more competition these days. Space on grocery store shelves is limited and today more breweries than ever before are packaging their beer for store shelves. Nudging your way into the local bar’s tap rotation is also more difficult. Competition has never been higher.

There’s a lot of speculation out there and a lot of concern. What the future holds, I will not presume to know. One thing is for sure, Washington’s seven percent decrease in production can be explained logically, without histrionics and fatalist predictions, and should not be taken as a sign that the end is near.

Poke & Pints fundraiser at Hellbent Brewing - Saturday, March 21st
Steam Donkey Brewing steps up for the All Together project
Zeeks Pizza brews up, and delivers, some impressive collaboration beers