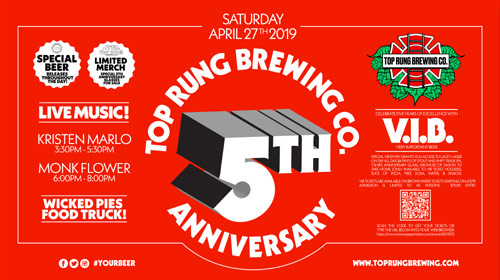 On Saturday, April 27th Top Rung Brewing celebrates its 5th anniversary at its taproom in Lacey, Washington. Among other things, the celebration includes the release of some special beers. Here’s the announcement from the brewery:

Top Rung Brewing is excited to announce that we will be celebrating our 5-year anniversary on April 27 by holding a 5-year Anniversary celebration at the brewery. Our celebration will feature four new beer
releases, including our Anniversary Ginger Lime Pale, limited release of some special barrel-aged beers,
live music, and Wicked Pies Pizza food truck.

In addition, this year we’ll also have a VIB (Very Important Beer) area with only 40 tickets available for a special experience. Tickets are available at https://www.brownpapertickets.com/event/4201923.