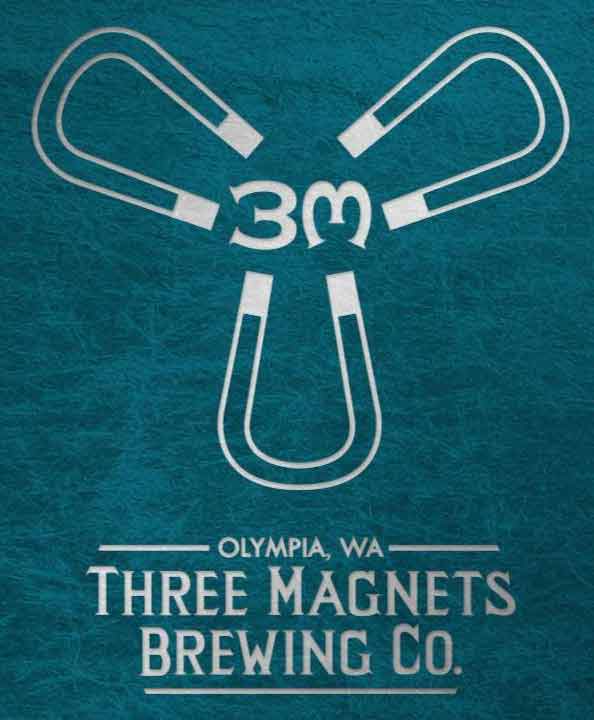 Updated on May 12: It’s another trademark issue: one brewery needing to change the name of a beer at the behest of another brewery.

Three Magnets Brewing has changed the name of its flagship IPA to comply with a cease and desist letter from another brewery. The beer formerly known as Rainy Day IPA is now 3Mag Rain IPA.

Three Magnets did not mention the second brewery by name in the statement that we (and presumably other media outlets) received. Still, to those familiar with the local beer and brewery scene, it was pretty obvious that the second brewery was Rainy Daze Brewing of Silverdale.

Rainy Daze Brewing did not put out an official statement. I did, however, talk to Mike Montoney, the owner and brewer at Rainy Daze, about the situation. Mike explained that there were conversations between the two breweries about the situation, but in the end he felt the need to protect his brand and business. Paying an attorney for legal counsel, and to issue a cease and desist letter, was not at all the tact he hoped to take.

“There are two sides to every story and I only hope that the people who know me understand that I tried,” said Mike. “It was hard for me to take that road. It cost me money and time that I don’t have.”

“After almost three years in business, I feel that all the hours of hard work to build a brand are starting to pay off,” said Mike. “This whole Trademark issue that we took action on was not intended to torment Three Magnets. It was, just plain and simple, to protect what I and my family have sacrificed so much for over the last three years. I hope we can all just move forward.”

The following excerpts come from the statement we received from Three Magnets Brewing:

“In early April, we received a phone call from another brewery requesting that we change the name of our Rainy Day IPA, citing that it was too similar to the name of their brewery, and was causing confusion in the marketplace. While deliberating how to respond, we ran into the owner of the other brewery the following week at the Craft Brewer’s Conference in Portland, OR.”

“We shared the story behind the beer – it was named after Rainy Day Records, a record store that has been in Olympia since the 1970’s…”

“We conveyed that we wished to try and search for an amicable solution that would retain both companies’ hard earned brand equity, while potentially being beneficial to both parties. We agreed to follow up with each other following the conference to discuss further.”

“At the end of April, the other brewery reached out to us and made it clear they were not interested in compromise, and insisted that we change the name of the beer. We asked to have until the end of May in order to have time to develop a well thought-out transition plan to mitigate any potential brand damage. The other brewery was hesitant to this idea, and said they would check in with their lawyer.”

“A week later, we received a letter from their lawyer, dated April 30, to immediately cease-and-desist calling our product Rainy Day IPA, due to violating their common-law trademark. Failure to comply within 10 days would result in legal action, which could include being sued for all profits we had made from our Rainy Day IPA…”

“…We do recognize the similarity in names, and we very much respect their desire to protect their brand equity in an ever increasingly competitive market. That being said, we are disappointed that they declined a great opportunity to work together to see if there was a solution that could benefit both breweries. And we are even more disappointed that we were not afforded, what we considered to be the minimum reasonable amount of time necessary, to rebrand and transition to a new brand name.”

“But we won’t let this situation ‘rain on our parade’. We are instead going to turn this into a positive! We are starting with a rebrand of our IPA line. An emergency meeting was called between the brand specialists at Three Magnets and Whitewood Cider Company, and we are very pleased with the outcome. The beers, formerly known as Rainy Day IPA and Sunbreak IPA, will now simply be referred to as 3Mag Rain IPA, and 3Mag Sun IPA. The beers will remain the same recipe, and we will still offer it to our customers in the South Sound, Tacoma, and Seattle markets. We will be rolling out the new brand identity over the coming months.”

“We have asked all of our wholesale accounts to change their tap lists to reflect the new name, updated all references to the beer on the web, and updated all in-store promotional material. Rainy Day IPA is officially dead. But to quote the great Obi-Wan Kanobe, ‘If you strike me down, I shall become more powerful than you can possibly imagine.'”