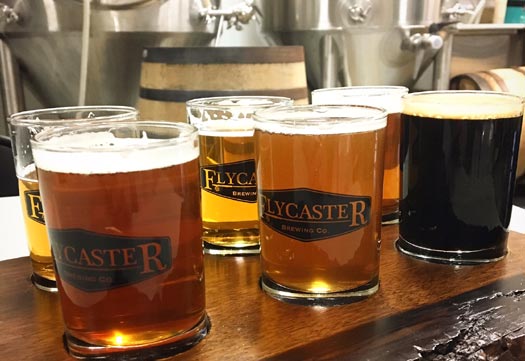 As a Seattleite, sometimes the low-hanging fruit is the most difficult to reach. I’d blame the traffic, but that’s a lame excuse. I was overdue for a visit to Kirkland, that’s all. Last weekend, Kim and I decided it was time to remedy the situation and actually make the trip across the lake to visit all three of Kirkland’s breweries.

Note that the Cross Kirkland Corridor basically connects all three of these three breweries. I like to call it the Kirkland Brewery Trail. It’s a ten-foot-wide crushed gravel trail that runs from the South Kirkland Park and Ride to the Totem Lake Business District following an old railroad grade. Chainline Brewing is actually along the trail, whereas Maelstrom Brewing and Flycaster Brewing are each just about a block off the trail. On bike, or foot, the entire trail from brewery to brewery to brewery is just 3.7 miles each way. It is mapped below.

Flycaster Brewing – The oldest of Kirkland’s three breweries, Flycaster Brewing opened in 2014. The big news here is that Jeremy Eubanks has decided not to sell the brewery, which we reported back in January. He got close, but after a slow-to-develop deal finally fell apart, he and his wife experienced a change of heart and decided to forge ahead. Sometimes you don’t know what you’ve got until it’s gone, or almost gone.

The plan is to expand the operation. Currently, Flycaster Brewing distributes most of its beer across the bar at their own all-ages taproom near Totem Lake, but they intend to become more widely available at other locations. You’ll find this brewery and taproom near that mysterious spot in King County where 124th Ave NE meets NE 124th Street.

I had not visited Flycaster since the days when they were brewing on a half-barrel Sabco system. Since then, they have graduated to a 7-barrel system and recently added some more tanks to the farm.

The beers are solid. My favorite was the barrel-aged stout, which was a special beer for their Customer Appreciation Day (last Saturday). Kim raved about the Pale Ale and we both appreciated the ESB, a sadly forgotten style that is delicious when properly executed.

Maelstrom Brewing – Long overdue first visit. Way overdue. I love it when I visit a “new” brewery for the first time and am overly impressed by the beer. Maelstrom Brewing opened last July, so maybe it doesn’t exactly qualify as new, but it was new to me.

Just five minutes away from Flycaster Brewing by car, Maelstrom Brewing is housed in a free-standing building that is a bit out of the way and sits just west of I-405 off of the 116th Street exit. You will often find Scott and Katherine, the owners, tending bar and bussing tables at the cozy, all-ages taproom. A garage door opens to a south-facing patio and, surprisingly, the freeway noise isn’t too bad. Pro tip: free arcade games.

The beers were all solid examples of each styles, with a touch of creativity. On tap right now, the must-try beer is the Raspberry SMASH (Single Malt, Single Hop). Scott usually handles the brewing, but this was Katherine’s first effort. Nailed it! Delightfully fruity, but not overly sweet and surprisingly dry, this one will make you long for warm summer days on the patio. That was Kim’s favorite beer, while I enjoyed the Kolsch. The Kessel Run IPA was also quite nice: a refreshing return to the normal, non-hazy IPAs of yore.

Chainline Brewing – The last time I visited Chainline Brewing it still had that new taproom smell. I was delighted to find that these days it has comfortably matured. Chainline opened in April of 2015, but it seems like it’s been there for much longer, feeling like a friendly, community gathering space for the neighborhood’s families and the region’s wayward beer geeks. I would imagine the real geeks at the neighboring Google campus spend some time plotting to take over the world at Chainline as well.

Surprisingly, the ballet academy is still next door. After all these years there have been no reports of lecherous dancers assaulting friendly, innocent beer drinkers. (See this, if you don’t get the joke.)

Seriously, what took me so long to get back here? I love their beer. Apparently everyone else does, too. They keep winning awards and medals. On tap right now, Kim and I both enjoyed the Brake Czech, a smooth, mild, dark lager that they’re pouring through their fancy-ass Czech tap system (ask for a sample of the “milk pour,” which I call the “cloud pour”). Of course you can never go wrong with a Polaris Pilsner or a Trail Gnome IPA.

Soaking up the West Maui beer scene
Go Find Beer - Stanwood, Skagit, and beyond
A first visit to Bickersons Brewhouse in Renton