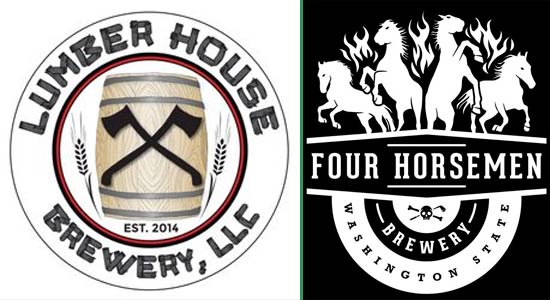 Is there trouble brewing in unincorporated King County? Two breweries were recently informed that their taprooms were not compliant with King County zoning codes and must be shut down. This comes after the two businesses, Lumber House Brewery and Four Horsemen Brewery, have operated successfully for some time, have made investments in their businesses, and have gained support from their communities.

I have been told that Four Horsemen Brewery and Lumber House Brewery are among a number of breweries impacted by a new regulations that prohibits them from operating tasting rooms because they are located in rural parts of unincorporated King County. Either that or existing regulations are now being interpreted and enforced differently. The situation is not entirely clear, except that these businesses are suffering.

“After 2 years of being in business without a single bad mark from any governing body, we were confronted with the County claiming we were no longer compliant with new RCW implemented in 2016,” says Melissa Earl of Lumber House Brewery. “Our business had been approved and began operations in 2014. Our liquor licenses never would have been issued if the county had not signed off on our business model.”

It was an unexpected knock at the door. Lumber House Brewery operates a popular taproom near Hobart, Washington that is beloved by its local community. They’ve invested in the business to better serve the community and comply with codes. They pay taxes. They were in the process of hiring their first employee when this situation arose. The business is dependent on income from the taproom.

“After months of working with a lawyer and the County, we kept only receiving ambiguous information,” Melissa continues. “We were told to appear before a well-populated King County panel of Administrators. Subsequently, the Lumber House Brewery Tasting Room was forced to close December 8, 2017.  King County administrators indicated that regulations established in 2016 (2 years after our approval), would prevent Lumber House from serving our locally sourced and brewed beer in the brewery tasting room, thereby eliminating our primary source of income.”

Melissa Earl’s best guess is that the changes were in response to a study conducted by the County a couple years ago, the Sammamish Valley Area Wine and Beverage Industry Study. Read all about the study here.

According to a document provided by the County, the study was conducted because “A neighborhood group filed several code enforcement complaints against wineries in unincorporated King County.”

I reached out to the King County Ombudsman’s Office asking for their version of the story. I asked a lot of questions, actually. They replied succinctly and in a timely fashion, confirming that the County was just now learning of the situation and had begun to investigate the complaints. That is, I was not offered a solid reason why any of this is happening right now, but I was told that they are looking into the matter.

Representatives from Lumber House Brewery and Four Horsemen Brewery tell me that they feel targeted, though not maliciously. They wonder if King County is looking to contain brewery taprooms within city limits. Understandably, they feel helpless.

If this is, as it seems, due to a change in zoning regulations, why were the businesses not informed before they made further investments? Why didn’t they, or the public, have a chance to comment on the proposed changes? Hopefully these and other questions will be answered soon.

Do you think that brewery taprooms are a valuable part of our community? What can you do? What should you do? King County needs to hear from consumers and residents regarding this matter.

You can add your name to a petition to the county to keep wineries and tasting rooms open in rural King County.

Lumber House Brewery has set up a web page with more information about how you can help.

If this issue is important to you, contact your County Council member.

Some outstanding events planned at Brouwer's Cafe, including Big Wood Festival
New Belgium Brewing sold to Lion Little World Beverages. There may be others
What's on tap right now at Georgetown Brewing