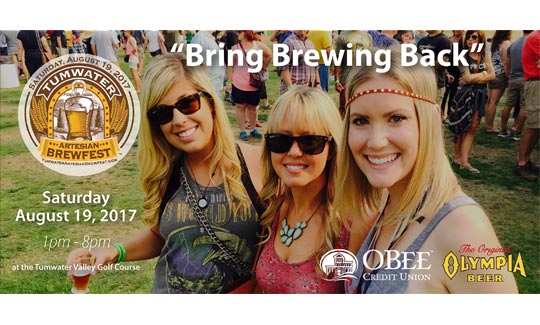 On Saturday, August 19th,  35 breweries will gather at the Tumwater Valley Golf Course for the Tumwater Artesian Brewfest. We are happy to have the festival aboard as a blog sponsor. The list of breweries and event details are below. The event actually takes place on the grounds of the driving range. Beer, games, food and adult beverages from 50 producers.

What is an Artesian Brewfest?

Just a quick history lesson here. This brewfest is a nod to Tumwater’s important place in local and regional brewing history. I know that many people around Seattle (and Washington in general) don’t know the proud, storied history of Olympia Beer, but all you really need to know is that about 120 years ago a brewmaster from Germany, Leopold Schmidt, built a brewery at the base of Tumwater Falls on the Deschutes River (yes, Washington also has a Deschutes River). That’s where Olympia Beer was brewed (more or less) until the brewery was closed in 2003 after the company was acquired by Miller Brewing.

For a long time, Olympia Beer was brewed using water from artesian wells. Basically, that’s a well drilled into a particular kind of aquifer—an artesian aquifer. In advertisements during the 70s and 80s Olympia Beer portrayed artesians as mysterious gnome-like characters that lived deep in the forest, suggesting that their magic was responsible for the water and hence the beer’s great taste.

The Tumwater Artesian Brewfest features adult beverages from 50 regional craft breweries, wine producers, cider makers and spirits distillers. Along with that, games like human foosball, cornhole and the ever-popular stein holding competitions, which pits competitors against each other in a test of strength and stamina. The Tumwater Artesian Brewfest is hosted by the City of Tumwater, the Tumwater Downtown Association and sponsored by local businesses.