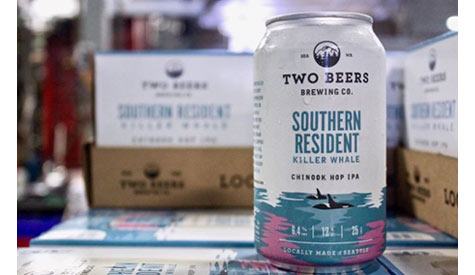 Seattle’s Two Beers Brewing Company just announced the release of Southern Resident Killer Whale IPA, a beer brewed in partnership with The SeaDoc Society, a nonprofit organization dedicated to ensuring the health of marine wildlife and the marine ecosystems through science and education. While the beer’s mission is to draw attention to the dire situation of the of this population of orcas, SeaDoc Society takes a multi-species approach, striving to find science-based solutions for marine wildlife in the Salish Sea.

The Southern Resident IPA features a QR code on the box. Consumers interested in learning more about The SeaDoc Society can scan the QR code with the camera app on their smartphones and be instantly directed to the SeaDoc Society website where they’ll find more information about ways to get involved.

“I’ve built my life and my home here in the Puget Sound,” says Founder and CEO of Two Beers Brewing Co, Joel VandenBrink. “The Salish Sea is our backyard and we have a duty to take care of all its inhabitants. I want my son to grow up knowing about the Southern Resident Killer Whales in the present tense.”

Southern Resident IPA (6.4% ABV and 25 IBU) is crafted with certified Salmon Safe Chinook hops, a nod to the primary food source of this population of orcas. Southern Resident IPA boasts a balanced, soft mouthfeel alongside flavors of grapefruit, pineapple, and light pine.

Customers interested in purchasing Southern Resident IPA can pick up 6 packs at The Woods Tasting Room in SoDo (4660 Ohio Ave S. Seattle, WA 98134) or at locations throughout Washington where Two Beers Brewing beers can be found.

Southern Resident Killer Whales are the only killer whale population to be classified as endangered in North America due to a combination of factors including toxic pollutants, vessel traffic and noise, and a diminished supply of their primary food source- Chinook Salmon. Sales of Southern Resident IPA aim to support the recovery of these extraordinary whales and encourage stewardship of our shared Salish Sea ecosystem through donations to SeaDoc Society.

“With only 76 Southern Resident Killer Whales remaining in the wild, it’s crucial that we act now to ensure their future,” said Justin Cox, Communications Manager for SeaDoc Society. “We are so thankful to Two Beers for helping in that goal and for supporting science in the Salish Sea.”

Beer Release - Jack Rabbit's Palace, oak-aged sour ale from Best of Hands Barrelhouse
Beer release - a new IPA from Hale's Ale Brewery and another one coming soon
Like many other breweries, Chuckanut Brewery is counting calories