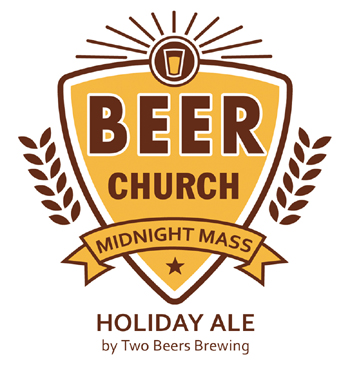 Two words: Two Beers. Two words: Beer Church. Two words: Pearl Jam. Coincidence? I think not! On Thursday, January 26th the Feedback Lounge hosts a very special event: Two Beers (or more), a benefit for the Crohn’s and Colitis Foundation of America (CCFA). In addition to all the other hoopla, the event includes the last precious drops of our Beer Church Midnight Mass Holiday Ale, the beer we brewed with Two Beers Brewing to benefit the CCFA.

Many of you are familiar with Beer Church, the organization we operate in addition to producing the Washington Beer Blog. Beer Church is a not-for-profit organization dedicated to creating fun and affordable ways for beer-loving individuals to contribute to charitable causes. Most recently, we brewed Beer Church Midnight Mass Holiday Ale with our friends at Two Beers Brewing – a beer to benefit the Crohn’s and Colitis Foundation of America (CCFA). (Learn more about the beer.) The beer is now very nearly extinct. We hoarded away two kegs for a special occasion. This is it.

On Thursday, January 26th, the remaining two kegs of Beer Church Midnight Mass will be tapped at a very special event at the Feedback Lounge in West Seattle: Two Beers (or more), a benefit for the CCFA. Join us for an evening of Pearl Jam music, Pearl Jam videos, and Pearl Jam memorabilia. There will be a silent auction as well as a raffle. We will be auctioning-off and raffling-off cool Pearl Jam memorabilia all night. In fact, some of the items will even be autographed by the band.

Located right next door to the Beveridge Place Pub (blog sponsor), the Feedback Lounge is unknown to most beer geeks who walk right by without hardly noticing its there. I understand. I know that the lure of the Beveridge Place is irresistible for hardcore beer nerds. The Feedback is a rock-themed bar offering drinks that rock, food that rocks, and rock that rocks. Don’t be afraid. It’s only rock and roll. It won’t hurt you… much. Seriously, if you like rock and roll you’ll love the Feedback Lounge. Televisions that play nothing but rock, walls plastered with rock memorabilia, and always great music.

On the same night that our event takes place at the Feedback, the Beveridge Place Pub will host a Black Raven Mini Brewers Night. You have two reasons to come to West Seattle. The Black Raven event starts at 6:00 and our event starts right next door at 7:00. Perfect.

You might be asking, what’s with the Pearl Jam theme? Mike McCready, guitarist for Pearl Jam, is a huge supporter of the CCFA. His fundraising efforts are admirable but perhaps his biggest contribution to the cause is increased awareness. For many people, he is the only reason they have ever heard of Crohn’s disease. McCready makes his fellow patients feel like they are not alone. He puts a recognizable face on an otherwise unknown disease. He is a rock star in more ways than one. This event honors his continuing contribution.

For more information about Crohn’s Disease and the CCFA please visit www.ccfa.org.