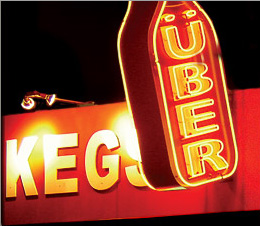 Congratulations to Uber Tavern. Seattle’s popular beer hangout on Aurora Avenue near Green Lake celebrates its seventh birthday this Wednesday, June 26. As should be expected, Uber Tavern intends to celebrate by tapping into some exceptional and rare beers.

Along with what they are describing as a lineup of “Ridiculously epic and rare kegs and special bottles,” Uber will offer $3 pints of Chuckanut Kolsch “to keep your cheap date dreams alive.” They have announced some of the beers but you’ll have to attend the party (or keep an eye on the taplist) to see the complete lineup.

We know they’ll be serving Belgian-brewed rarities like Mikkeller Spontankriek and De Struise Pannepot Reserva. Also, local gems like Two Beers Brewing’s Ascension 2012 (from a pilot batch brewed for the 2012 International Beer Fest), served alongside the Ascension 2013. There will be other surprises, too, like some treats from Cascade Brewing Barrel House.

Along with all that, they’ll be giving out some free passes to the Seattle International Beerfest, which happens at Seattle Center on July 4th weekend.

Want to keep taps on things? Here is the link to Uber’s online taplist: http://uselesstrash.com/uber/