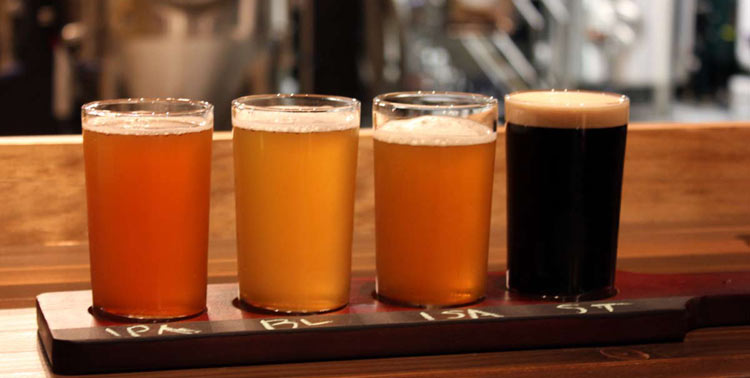 With so many restaurants, bars, and brewery taprooms across the nation closed due to the COVID-19 pandemic, it is understandable that on-premise beer consumption has plummeted. Here in Washington, where the statewide shutdown is now more than a week old, many breweries are using kegged beer to fill to-go growlers and crowlers, but there are precious few other outlets for selling draft beer. All the while, off-premise beer sales have risen, providing at least a pinprick of light on an otherwise dark landscape.

On-premise sales, which have suddenly dried up, amount to about 20 percent of all beer sales nationwide. For the craft beer segment of the beer market, the loss is especially devastating. The Brewers Association, which represents the nation’s small and independent brewers (craft breweries), estimates that about 40 percent of all craft beer sales are on-premise sales.

It’s a pretty bleak situation for most craft breweries, but there is some good news. I guess. Off-premise beer sales numbers have ticked significantly upward over the past few weeks. At grocery stores, liquor stores, convenience stores, and chain stores beer sales nationwide were up during the first two weeks of March 2020. This is according to data from IRI, a market research company that tracks this kind of retail data (beer that goes “beep” at the checkout counter). IRI shows that beer sales were up across all eight of the beer-specific categories it tracks.

Here in Washington, over the last week of February 2020, before we slipped into full-on panic mode, IRI-tracked sales were up about two percent over the same week last year*. Over the first week of March, as Costco began to run out of toilet paper and cleaning supplies, IRI-tracked sales were up about four percent over the same period last year. The statewide order that shut down restaurants and bars came on March 16th, so that IRI data does not account for what happened after the bars and brewery taprooms closed. One local brewer, whose brewery packages its beer in bottles and cans, told me that sales in grocery stores around the Greater Seattle Area were up by 20 percent since the shutdown. That is a very significant spike.

This increase in off-premise sales is nice, but it does not balance out. Even if you are a brewery that sells beer in both wholesale kegs and retail cans, in most cases the packaged beer sales are not increasing enough to make up for the drop in draft sales. Of course, each brewery is different, but even local breweries that distribute bottles and cans still rely on kegged product to provide a significant portion of overall sales.

If a brewery is packaging its beer in cans and/or bottles right now, it may be better positioned to weather the storm, but it is still a very, very serious storm.

In recent years, big thinkers in the craft beer industry have warned breweries about extending themselves into the off-premise beer market. It has become more and more difficult to find a place for your beer on the increasingly crowded beer shelf at the supermarket. The smarter play was to increase on-premise sales in the brewery’s taproom. That has been the big trend in the craft beer biz over the past few years.

Beyond the sales metrics, there is a real human toll. More than ever before, breweries employ a lot of front-of-house staff. With taprooms closed, there may still be some activity in the brewery,  but those kinds of duties don’t always involve the taproom staff. Many breweries, if not most breweries, have laid off or furloughed employees. More than ever, breweries are part of both the manufacturing industry and the service industry.

I suppose it all depends on how long this massive disruption lasts, but one thing is for sure, the craft beer industry will look a lot different when we come out of the other side of this tunnel. Then again, so will the entire world.

*I gleaned my data from various sources, including The Brewers Association, Good Beer Hunting, and Brewbound.

You Are Not Alone - Postdoc Brewing releases its version today
How one brewery is navigating this upside-down world: Fremont Brewing
Brewery taprooms now reopening across Washington