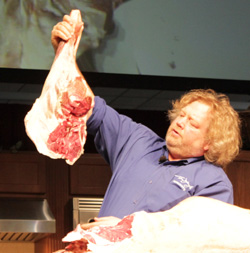 Last month Tom Douglas finally got his just deserts when the James Beard Foundation awarded him the title Outstanding Restaurateur (read about it).  After four unfruitful nominations, Douglas finally received this prestigious award. Although the award was inevitable, I half-jokingly attribute it to the fact that Tom Douglas Restaurants finally opened a beer-focused restaurant: Brave Horse Tavern. The restaurant gods talked to the beer gods and decided it was time.

Today we announce that Douglas’ Dahlia Lounge is stepping into the world of beer and food pairing. This is a big deal because Dahlia Lounge is regarded as one Seattle’s top dining destinations.  Upscale food deserves upscale beer. On Tuesday, June 26, Dahlia Lounge presents a very special beer dinner featuring Odin Brewing. It is sure to sell out. Do not delay.