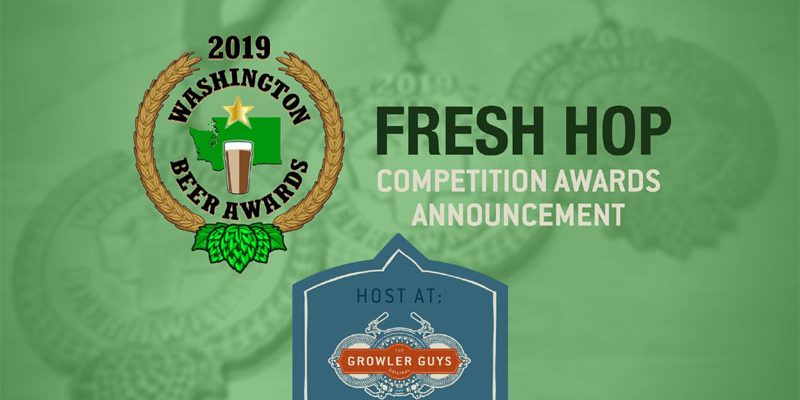 The winners of the Washington Beer Awards Fresh Hop Competition will be announced tonight (Thursday, October 10th) at The Growler Guys in Seattle. The announcement happens at 7:00 PM and is part of The Growler Guys Fresh Hop Fresh-tival celebration. The event will include, as you might expect, a lot of fresh hop beer on tap for your enjoyment. You can see the taplist here.

Here’s a press release about the competition.

Seattle, WA, September 13, 2019: Join us as we reveal the best Fresh Hop beers from the top breweries in Washington State! A team of trained beer judges has taken on the task of evaluating strictly fresh hop beers from Washington breweries all over the state in a blind format in the first ever Washington Beer Awards Fresh Hop Competition.

The results will be announced at 7:00 PM on Thursday, October 10 th 2019 at The Growler Guys in Lake
City (8500 Lake City Way NE, Seattle, WA 98115) as a part of their Fresh Hop Fresh-tival celebration. They will have a wide variety of fresh hop beers on top, some of which could be winners! The competition was organized by Specialty Competitions LLC and held with the endorsement of the Washington Beer Commission as a way to celebrate Washington’s growing brewing culture and recognize excellence in the craft. This focused competition focuses on beers brewed with fresh, unprocessed hops aiming to showcase the unique characters of the “fresh hop beer” style category.