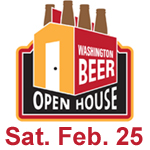 NOTE: I am updating his post as more information comes in. Also, keep an eye on the Comments as breweries chime in.

This Saturday, February 25th, the Washington Beer Commission presents Washington Beer Open House.  Knowing that people want details, I have scoured the web, searched the inbox and done my best to discover what each brewery is planning for Open House. Below I share what I learned from websites, newsletters, Facebook and Twitter.

ATTENTION BREWERIES: Use the Comments section below to leave any information about your Open House plans.

Breweries arranged alphabetically. Again, this is not the complete list of participating breweries.

7 Seas Brewing
Brewmaster Travis will be guiding a brewery tour @ 4pm. We will sample a few stashed away aged brews. We’ll have a little fun too…

American Brewing
American Brewing Company releases Skip’s newest brew…a SCOTCH ALE! “A smooth, malty sweet treat! A beautiful, clear, coppery red color.  You will enjoy the rich mouthfeel of this ale which allows the malty flavors to linger on your tongue.  A subtle hint of the Peat Malt and Roasted Barley add some deeper complexities to its flavor.  The overall hop characters are very low, which highlights its malty sweetness.” ABV: 6.0%, IBU:32.
NEW MERCHANDISE…going on sale this Saturday!  Be the first to buy the American Brewing Company black, pullover hoodie sweatshirt  $40.00.

Birdsview Brewing
Brewmaster Bill will be on hand giving tours and answering questions. Come on by and check us out!!

Black Raven Brewing
Special beers on tap and brewery tours. Including a 2011 Old Birdbrain Barleywine Preview. Our 2009 and 2010 vintages both won first place in 2011 and 2012 at the Great Alaskan Barleywine Festival.

Boundary Bay Brewery
Our Head Brewer, Aaron Jacob Smith, will be here to provide tours and stories for guests. We will provide snacks and will have a jockey box downstairs pouring some special beers! Imperial IPA will be on tap and will be available in 22oz bottles at the brewery only until they sell out (limit per person). And we are bringing back the Imperial IPA hoodie!

Chuckanut Brewery and Kitchen
We will be hosting an open house in the brewery with the brewers. Learn about Chuckanut’s hi tec computer system, our green sustainable practices, and taste some Keller Bier straight from the fermentation tanks (over 21yrs old).

Diamond Knot Brewing
We are opening up our Productions Brewery for the WA Beer Open House. Join us this Saturday, Feb 25, 2012 from 12-8pm, for tours, beer, free food (while it lasts) and a special cask beer, made specifically for the event.

Hilliards Beer
Brewhouse tours on the hour and amber-boiled brats from Snout & Co.

McMenamins Six Arms
Stop in and say hello to Six Arm’s own Kyle Jungck who will pour you some fine samples and show you the innermost secrets of this small but mighty brewery. Also note that from 12 noon until 5pm at Six Arms you can purchase an empty McMenamins logo growler for $2.00. This is a one day deal, and you must fill your $2.00 growler up with any Six Arms beer that day to get the deal!

McMenamins Mill Creek
Stop in and say hello to Mill Creek’s own Tannar Brewer (yes that is his real name) who will pour you some fine samples and show you the innermost secrets of his brewery. Also note that from 12 noon until 5pm at Mill Creek you can purchase an empty McMenamins logo growler for $2.00. This is a one day deal, and you must fill your $2.00 growler up with any Mill Creek beer that day to get the deal!

Tannar’s featured ale: Martian Pepper Ale.
In the tradition of Ancient Martian ales, relying on hot seeded green peppers instead of hops for their preservative qualities, this ale celebrates the original migration of brewers from our red neighbor in the year 85,432 b.c.e. by blending an English-style pale with the proto-alien original. Or, it’s an english style pale ‘dry-hoppped’ with de-seeded Jalapeno and Serano fillets, imparting a fresh pepper flavor with an extremely mild degree of heat and with out the sharp spiciness that one might expect. Frankly, in all the confusion, I kinda lost track.
OG: 1.056
TG: 1.010
ABV: 5.93%
Malts: Great Western Two Row, Great Western C75
Hops: Cascade
Special Adjuncts: Jalapeno, Serano peppers

Redhook Ale Brewery
Join us at the Forecasters Pub for beer sampling, brewery touring, and meet and greets with the brewers!

Schooner Exact Brewing
We have finalized our plans for the upcoming open-house… brewery tours with barrel tastings from our sour program and in the tasting room flights of ’09, ’10 and ’11 Woodsman with a Bourbon-Barrel aged Imperial Porter sidecar for $10.

Silver City Brewery
The brewery in Bremerton will host tours on the hour (1, 2, 3, and 4:00). 12 ounce pours available for purchase. Screaming deals on bottled beer.

Snipes Mountain Brewing
We will be releasing Golden Ale, a Belgian-style golden strong
Our first run of Prairie Oysters will be premiering as the appetizer feature
The brewer will be on site from 11-4 to provide tours and answer any
questions. 2006 Vintage Stout will be on tap.

Two Beers Brewing
We will have Infused Panorama Wheat, Infused Crooked Belgian Wit, a special keg of Evo IPA and the very very last cask of Jive Espresso Stout will be on the bar.

Yakima Craft Brewing
Offering $1 off pints and an opportunity to yap with the brewers in the brewery.