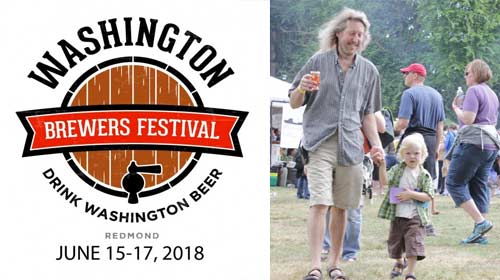 For the most part, this year’s Washington Brewers Festival at Marymoor Park (Friday, June 15 thru Sunday, June 17) will be the same great event you’ve always loved, but you need to know about one thing that has changed. You might be upset, you might not care, but you absolutely must know about this change.

This year at the Washington Brewer Festival there will be a limit on the number of tokens you can purchase. With your ticket, you’ll receive eight tokens. You will only be allowed to purchase an additional three tokens. Eleven tokens is the max. This year your wristband will include three removable tabs. When you purchase your three extra tokens, they will be removed. This limit does not apply to Friday since the festival is a 21+ event on that day. On Friday you can buy more than 11 tokens, but you’ll need to purchase them three at a time.

Since 2009 the Washington Beer Commission, the state agency that operates this and other beer events, has hosted over 50 beer festivals. As you can imagine, the Washington State Liquor and Cannabis Board (WSLCB) keeps a pretty close eye on things at these events. Only once has the Commission received a citation for liquor law violations at one of these festivals. Last year, at the Washington Brewers Festival, the WSLCB sent under-aged agents into the festival. So, ya, that happened. Along with issuing a citation for serving minors, the WSLCB expressed concerns about other things they witnessed at the festival, especially over-consumption.

Understand that the Washington Brewers Festival is uncommon in that it welcomes children on Saturday and Sunday. Since it’s always on Father’s Day weekend, the Commission thinks this is an important part of the festival and has fought to make it happen. The Commission recognizes, as does the WSLCB, that hosting a beer festival that welcomes children comes with responsibilities. They want this to be a fun event, but they also want it to be family-friendly.

The Commission wants people to have fun and enjoy the event, but they also want to provide a safe, enjoyable environment for families. And, of course, they must address the concerns of the Washington State Liquor and Cannabis Board. Eric Radovich, the Executive Director of the Washington Beer Commission, told me that the events committee considered every possible option on how to move forward.

The Washington Beer Commission is essentially a state agency that was formed by an act of the Legislature in 2006. It is largely operated by volunteers from various parts of the beer industry. Because of its affiliation with the state, this is serious business. There’s a lot on the line. They did not reach this decision lightly. The goal was to come up with a plan that addressed the concerns of the WSLCB, allowed the festival to be family-friendly, and continued to provide beer drinkers with a fun festival. They are very much aware that some people will not like the compromise.

A lot of people really love the family-friendly character of this festival, but allowing children at a beer festival is not normal, at least not in the eyes of the WSLCB. Given that, it’s really not surprising to see some enforced limits on consumption. Once again, to be clear, the token limit only applies to Saturday and Sunday, when children are allowed at the festival.