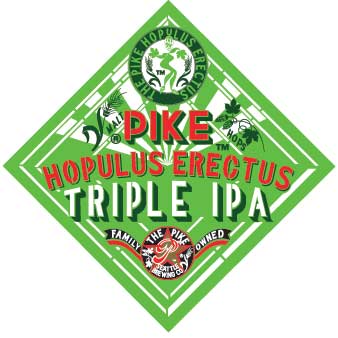 Updated on Sat, Feb. 15 – scroll down to see beer descriptions.

Last month, we told you about a series of upcoming events where local brewers will showcase their Triple IPAs. Since then, two more breweries – Spinnaker Bay Brewing and Strong Arm Brewing – jumped aboard, bringing the final total to 12 participating breweries. And the series now has an official name – the Washington Hop Mob Triple IPA Roadshow. (read our previous post.)

But now for the most important part – the beer! We’re still gathering info from the breweries, so keep an eye on this post. We’ll add the details of two of the beers each week (probably on Wednesdays) between now and the February 17 kickoff event at Brouwer’s.

According to the folks at Georgetown, their contribution to the Roadshow has very forward peach, passion fruit and strawberry aromas with a notable grapefruit burst. Its pronounced alcohol presence with a mild malt character makes this triple IPA more hoppy than bitter with moderate floral quality and a tangy, almost tea-like flavor. They also say it’s slightly sweet, but drier than you would expect from a beer with this ABV. Two yeast strains were used in fermenting – their proprietary yeast was pitched first to get the fruity esters and ferment out the beer about 90%, then an American Ale Yeast was pitched to finish the fermentation and dry out the beer. The Kiss Ass Blaster should be available at the brewery’s retail shop after the roadshow. 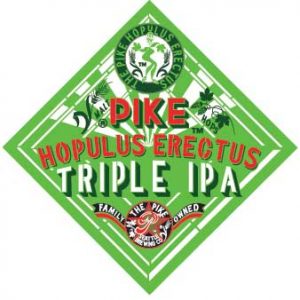 Head Brewer Dean Mochizuki likes hops and loves visiting the hop fields of Yakima. So, when presented the opportunity to make a Triple IPA as part of the Triple IPA Roadshow, he jumped on it. His love of hops definitely shows in Hopulus Erectus, which was brewed with five pounds of hops per barrel. Dean and team used Galena hops for bittering, Horizon, Ahtanum and Summit hops for flavor; Summit, Ahtanum, Horizon, Simcoe and Mosaic for aroma; and Simcoe, Mosaic and Summit for dry hopping. They dry hopped it twice in the fermenter and again in the bright beer tank. Hopulus Erectus will also be available on tap at the Pike Pub & Brewery.

“We brewed this beer inspired only by the challenge to do something we have never done. Brew a triple IPA? What the hell is a triple IPA anyway? Is it a young barley wine or a super imperial IPA? Well whatever it is, here you go! Enjoy with caution and make sure you are sitting down.

This beer tested both the limits (and patience) of machine and man. My first attempt was lost to the evil stuck mash gremlin. On the second attempt, the gremlin was defeated and banished to Oregon, where he will forever wreak havoc on some of those ‘tap takeover’ brewers. Take that Oregon! I really should have named this beer “Hop contract slayer” with all the hops we threw at it.”

A limited-batch of 12oz bottles will be available at Black Raven on Feb. 22 as part of the Washington Beer Open House.

This may be their first triple IPA, but the folks at Elysian Brewing are no strangers to big beer. Their past brews have included several high ABV, hop-forward beers, such as Diprohopus, Hubris, and Bye Bye Frost. Brewed with Citra, Nelson Sauvin and Hop 291 hops, Yippee Ki Yay will taunt your taste buds with hints of strawberries, blueberries, peaches, passion fruit and pine. If you can’t make it to a Roadshow event, they’ll have it on tap at all three Elysian locations beginning next week.

Given their love of science, it’s no surprise the folks at Stoup named their first-ever triple IPA after T2R, a class of bitter receptors on your tongue. According to co-founder and head brewer Brad Benson, they had a little fun with the hopping procedures, “Mill hops, mash hops, kettle hops, hop bursting, hop imploding, hop exploding, hop back, dry hops, hop missiles and rockets. We slept on hop pillows the night before. We prayed to the hop gods and even the hop devil, just to cover our bases!” Ultimately, he says, they decided to go for balance in the beer. You can put some T2R on your T2Rs at the Stoup tap room and a few select local pubs.

Beer name: Cry Me A River

This will be the third year Cry Me A River has been brewed. The folks at Naked City created it as response to the crazy hype around another well-known Triple IPA no longer available in the Seattle market. They took inspiration from Big Time Brewing and their Whiny the Complainer. Naked City didn’t set out to brew a clone of that “certain beer.” They merely want to put their spin on it and let people know that you can indeed get some amazing, extremely hoppy beers in the great state of Washington. They have no plans to bottle Cry Me A River, but they’re releasing at Naked City on Jan. 30 and will be distributing small quantities to select local pubs.

Hops: Citra and Amarillo with a touch of Columbus

This Triple IPA is based on a special beer originally brewed for Populuxe’s first Founders Club event. The Full Spectrum has 6 boil additions and requires an 8-day, 4-stage dry hop. The malt character is clean and light, with a crisp, dry finish allowing the hops to shine through. The crew at the brewery says it pairs well with…more IPA! The Full Spectrum will also be available at their taproom if you can’t make it to the Roadshow or want to get your fix between events.

Last summer, Airways debuted their Loud Lady Double IPA – a delicious flavor bomb brewed with 52 pounds of hops in each 10-barrel batch. For their entry in the Roadshow, Owner and Head Brewer Alex Dittmar and crew decided she needed a mouthier sister. Introducing the Very Loud Lady Triple IPA. If she’s anything like her sister, expect a big, drinkable beer with tons of hop aroma and flavor. You can make your acquaintances at Roadshow events and at Airways Brewing Tap Room or Airways Brewing Beer & Bistro in historic downtown Kent. 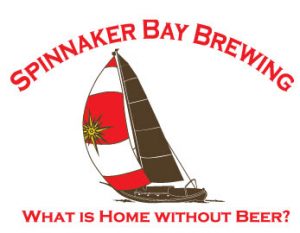 Malt: Pale with a touch of Munich and Carapils for balance and body

The Roadshow will be Spinnaker Bay’s maiden voyage into the world of triple IPAs. The name they’ve chosen is rather appropriate for a beer that Head Brewer Janet Spindler says could reach 13% after it’s brewed. They proudly make strong beers – their house IPA is an 8% ABV Imperial IPA – and they’re looking forward to showcasing their stronger brews to local beer lovers. Spinnaker Bay also plans to have limited quantities of Three Sheets to the Wind available at their brewery.

Brewmaster Russell Everett likes a good challenge and couldn’t pass up a chance to show local beer drinkers just how great we have it here. For their first-ever triple IPA, Bainbridge Island Brewing decided to build a bigger octopus…er, Hoptopus. They’re taking their Puget Sound Giant Hoptopus – a year-round IIPA weighing in at 8.8% ABV, 88 IBUs and dry-hopped with 8 different hops – and cranking it up a few notches. In the spirit of the Roadshow theme, all of the hops and most of the malt Russell and crew are using were grown in Washington. They’re double dry hopping the beer using a new recirculation protocol they’ve been working on. The planned result is a big, dry beer with a balanced malt backbone. Hoptopus Rex is expected to have big flavors and aromas of grapefruit, citrus, tropical fruit, pine, resin, and maybe even strawberries. In addition to the Roadshow events, watch for Hoptopus Rex to make appearances at the brewery’s taproom and a few other locations.

Malt: Gambrinus Pale, Caramel, Munich, Wheat, and a little sugar to make sure that the beer doesn’t get too sweet.

This is Reuben’s Brews’ first go at a Triple IPA. As the name implies, Blimey That’s Bitter will focus on hop aroma and flavors – largely pine, citrus and tropical fruit. Reuben’s plans to “hop burst” this beer, meaning the vast majority of the hops will be in the last 10 minutes of the boil. And since it’s a Triple IPA, they will also dry hop the brew three times! They’ll also be bottling a small amount of Blimey, so keep an eye out for further details. 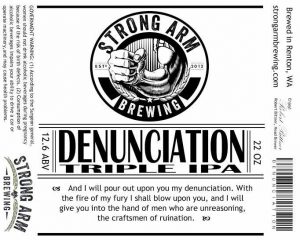 Denunciation made its debut at the Friday session of the 2013 Washington Brewers Festival and it was a hit! Once word was out, the crowd descended on the Strong Arm booth and they ran out within a few hours. To make this tasty concoction, they do a 90-minute boil with hop additions every 10 minutes for the first 60 minutes and then hop burst every 5 minutes for the final 30 minutes of boil. They also heavily dry hop this beer with Amarillo, Cascade, Citra and Simcoe. But there’s one secret ingredient that makes Denunciation special – the Strong Arm team serenaded the fledgling beer with all late-80s/early-90s power rock ballads during the brewing process. Yes, this beer was conceived to the delicate strains of Poison’s “Every Rose Has Its Thorn,” Warrant’s “Heaven,” and Saigon Kick’s “Love Is On the Way.” It also gets its description and the inspiration for its name from Ezekiel 21:31, “And I will pour out upon you my denunciation. With the fire of my fury I shall blow upon you, and I will give you into the hand of men who are unreasoning, the craftsmen of ruination.” If you can’t make a Roadshow date, Strong Arm plans to have some Denunciation available at the brewery.