The best sports and beer bar you’ve never heard of is about to celebrate its first anniversary.

There was a time when the southern region of West Seattle was a beerless wasteland. The nearest signs of life were at the Beverage Place Pub on California Ave and Big Al Brewing in White Center. Then about five years ago an odd beacon in the wilderness appeared: Super Deli Mart, offering an uncommon melange of convenience store and beer bar, where you could get a pint of great beer and also buy a pack of Marlboro Lights and a bag of Cool Ranch Doritos. If nothing else, Super Deli Mart served as proof that the neighborhood was desperate for good beer. A few years later, The Westy Sports Bar and Spirits opened a few blocks away on 35th Ave. SW.

This weekend (November 21) The Westy celebrates its first anniversary. Currently, a tap-takeover is already underway, with beers from Reuben’s Brews dominating the menu. That will continue for at least the next week. Tonight (Wednesday, November 18) the crew from Reuben’s Brews will be in the house for a brewers night celebration. But the anniversary celebration (complete with Skee Ball tournament) is this weekend. 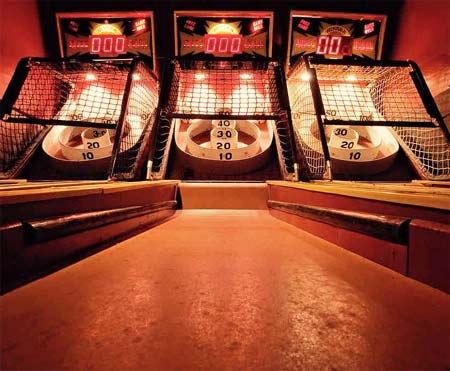 The Westy is the kind of sports bar craft beer lovers can appreciate. There are no Bud Light neon signs glaring in your face, no plastic Corona palm trees, and no Red Bull posters. It’s a more-civilized kind of sports bar. It’s a 21+ joint with lots of televisions, excellent food, and an exceedingly thoughtful tap list. Hint: always ask if there’s anything special on tap, something not mentioned on the taplist. You might encounter a treat, like something tart and delicious from Cascade Barrel House. And for those who prefer cocktails, this is a top notch destination for spirits. (Both of the owners have developed recipes for BroVo Spirits.) Did I mention Skee Ball?

As part of the anniversary celebration, The Westy is hosting a Skee Ball tournament beginning at 7:00 on Saturday, November 21. It’s free, and they’ll give away some great prizes to the winners. Also, they’ll set up the arcade table to play classic 80-vintage video games. Set up to play for free all day long.

Whether you make it down for tonight’s Reubens Brews brewers night, or this weekend’s anniversary celebration, keep The Westy on your radar. Great beer, great food, and a great place to catch a game. And did I mention Skee Ball?

From the street, it looks small, but do not be alarmed. The Westy is Tardis-like. It’s bigger on the inside.