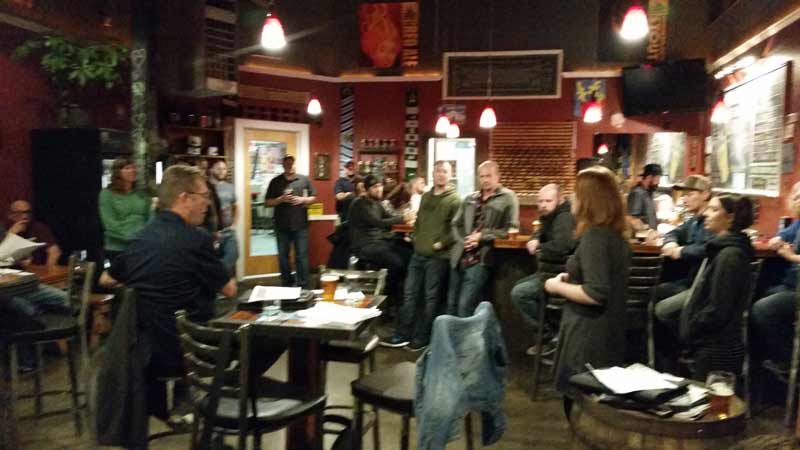 Yesterday I told you about the Washington Winter Beer Festival, which is a primary funding mechanism for the Washington Brewers Guild. It occurs to me that many of you may not know what that means. Many of you may not understand why you should give a flying leap about the Guild. Here is why you should you feel good about buying tickets to the Winter Beer Festival.

Nearly 300 breweries call Washington home and they’re out there right now making beer for you. Not just in Seattle, but in places like Ferndale, Waitsburg, Seaview, and Kettle Falls. You want to drink tasty, local beer? Washington’s breweries got your back.

But who’s got the breweries’ back? Who’s looking out for the interests of our local brewing industry? The Washington Brewers Guild, that’s who. (Don’t confuse the Guild with the Washington Beer Commission, which is discussed below.)

The purpose of the Guild is to build a community of brewers while advancing their common interests. What do I mean by “interests?” Well, I’m talking about laws and policies, taxes and regulations. The Guild works to make sure the Washington State Legislature and the Washington State Liquor Control Board don’t run roughshod over the state’s brewing industry. I promise you that, given the opportunity, the powers-that-be in Olympia would over-tax and over-regulate the craft beer industry to death.

They’ve tried, but thankfully the Guild was there to disrupt their evil plans.

Even the largest Washington breweries qualify as small businesses. Usually, they are very small businesses and are often operated by notoriously laid-back, easy-going people. On top of that, it is a growth industry and is what many people view to be a “sin” industry. In other words, Washington’s craft breweries are an easy target without the Washington Brewers Guild providing a united front.

From time to time, it is necessary for the Washington Brewers Guild to take a formal position on an issue. Before doing so, it solicits input from its members who have a wide variety of business models and ideologies. The Guild then distills that information down into a position that is the best for the overall brewing community of Washington.

Right now, members of the Washington Brewers Guild executive committee are on a big roadtrip around the state, meeting with the local members, sharing information, and promoting a sense of community among Washington’s 297 breweries. They call it the Roadshow. On the itinerary, stops in Leavenworth, Spokane, the Tri-Cities, Vancouver, and Bremerton.

At each stop, they’re meeting with local brewers to share information from the Guild Board of Directors on recent activities and to offer local breweries a chance to weigh-in on the 2016 legislative agenda. Beyond that, brewers hear guest speakers talk about topics like draft quality and distributor contracts. Boring stuff for us beer drinkers, but highly valuable to breweries. They’ll also learn about what the Liquor Control Board is up to. (it’s now called the Liquor and Cannabis Board, BTW.)

Membership in the Washington Brewers Guild is voluntary. Participating in Guild activities and serving on the executive committee is also voluntary. It is a noble endeavor performed by people who are passionate about seeing Washington’s brewing community thrive.

Breweries are not required to join the Washington Brewers Guild, but the fee is nominal. Not all breweries are members, to be fair. I’d like to think most breweries are smart enough to recognize the value the Guild offers when it comes to fighting Olympia, if nothing else. I’d also like to think that most beer drinkers are smart enough to recognize the value of the Washington Brewers Guild.

The Washington Winter Beer Festival is one of the Guild’s primary funding mechanisms. You can feel good about buying a ticket and supporting the cause. Whether you know it or not, if you love Washington Beer then you also love the Washington Brewers Guild.

The Guild and the Commission have some shared interests, to be sure, but are totally separate organizations.