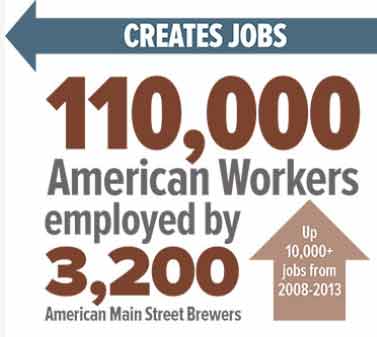 This Wednesday, March 25, the Brewers Association, Fremont Brewing Company, and representatives from more than 20 other American craft breweries descend upon Washington, DC in support of the Small BREW Act. As we’ve reported before, the Act would reduce the per-barrel federal excise tax rate paid by breweries from $7 per barrel to $3.50 per barrel for the first 60,000 barrels produced. (See our previous story for more info.)

To learn more about the Small BREW Act, and what’s happening in Washington, DC, see our previous post.

Why Support the Small BREW Act?

Beyond reducing a tax burden, why is the craft beer industry (in large) fighting for the Small BREW Act? More importantly for this forum, why should beer consumers care?

Maybe you just want to drink beer, don’t want to concern yourself with this kind of stuff, and consider this an industry matter and not a public matter. That’s an understandable position, but many craft beer drinkers are also enthusiasts and support the industry beyond simply drinking beer. That’s why I present this information.

The term BREW is an acronym for Brewer Reinvestment and Expanding Workforce. The whole point of the Small BREW Act is to allow breweries to expand operations, hire new employees, and drive innovation. In theory at least, growth and innovation are good for consumers. Below, I explain the nuts and bolts in greater detail, but what about some real world examples?

We need real examples from real breweries. How much money would the Small BREW Act free-up for reinvestment? One brewery provided me with a specific plan. Otherwise, we can look at the numbers and see what kind of capital is involved.

“If [the Small BREW Act] passes, we’d use the savings to hire two more people and buy another fermenter,” says Nelson.

That’s tangible. I’ve asked other breweries to provide concrete examples, but have not received any responses yet. Likely, they’re too busy with day-to-day operations to focus on the “what ifs” of tomorrow.

Looking at a couple of random examples…

To be fair, all of this assumes that reinvestment is how a brewery would use the savings. Also, to be fair, it should be noted that in 2013 only 22 of Washington’s 200+ breweries produced more than 3,000 barrels. (See our report from last June.) For the majority of the state’s breweries, the savings would be welcome, but the impact of the savings would be relatively small. In other words, if a brewery saves $3,000 or $4,000, it’s not likely that money will buy a new stainless steel fermenter or hire a new employee.  But every bit helps and every small brewery dreams of growing.

As far as the recovery and growth of our national and local economy is concerned, studies show that the Small BREW Act’s reduction in tax revenue is outweighed by the positive economic impact. In other words, studies show that the less federal excise tax America’s small breweries pay the more money they will end up investing in growing the economy.

According to a report from the Brewers Association (available here), the proposed change in the federal excise tax on beer production would increase economic activity by at least $205 million in the first year and $ 1.2 billion over five years. It would also generate about 6,000 new jobs over the first 12 to 18 months, followed by an average of about 570 new jobs per year thereafter.

The new rate of $3.50 per barrel for breweries producing less than 60,000 barrels per year would provide approximately $28-$32 million per year (based on 2012 data) to help strengthen America’s craft brewers and support their efforts to maintain and generate jobs.

Today, once production exceeds 60,000 barrels, a small brewer must pay the same $18 per barrel excise tax rate as the nation’s largest breweries. In other word, a brewery the size of Georgetown Brewing (52,300 barrels in 2013) is frightfully close to paying the same tax rate as Anheuser-Busch (99 million barrels in 2013). Many beloved craft breweries are already in that position (Sierra Nevada, Deschutes, Dogfish Head, Brooklyn, Founders, Stone, and many more).

The Small BREW Act increases the threshold for that maximum tax rate from 60,000 to 2 million barrels.

Adjusting the tax rate to $16 per barrel on beer production above 60,000 barrels up to 2 million barrels would provide small brewers with an additional $32 million per year (based on 2012 data) that would be used to support significant long-term investments and create jobs by growing their businesses on a regional or national scale.

For a lot more information, visit the Government Affairs section of the Brewers Association website.

Interested in pledging your support and letting your congress know how you feel? Click here to find out how.