Seattle loves beer. Our beloved football stadium has been dubbed one of the best in the NFL for craft beer. The city of Seattle is home to more than 40 breweries, with dozens more in the surrounding area. The state of Washington is home to more than 200 breweries. There is plenty of great beer to drink around here. What’s more, some of it is designed specifically for the loudest football fans on earth.

Here are two beers designed specifically for the 12th Man.

First up, the 12th Can from Hilliard’s Beer. It’s an American Pale Ale. Light bodies and effervescent, it will sooth your throat after hours of incessant screaming.  Widely available at grocery stores and bottle shops around the Seattle area. Or stop by the brewery in Ballard, which happens to be Seattle’s most prolific beer neighborhood (10 breweries in one neighborhood). Next up, 12 Man Pale Ale by Dick’s Brewing Company. This brewery partnered with a former Seahawks player to create this one – kicker Norm Johnson. To learn more about this beer, see the post we did last month. Also widely available at grocery stores and bottle shops around Seattle. 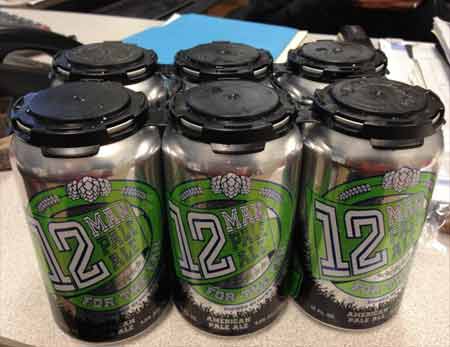