What is a super-collaboration beer? Well, it’s how  Wingman Brewers of Tacoma decided to commemorate its  8th anniversary. The brewery teamed up with seven local breweries and one local malting company to create an eight-brewery collaboration beer: Fortune Teller IPA. (See the beer stats below.)

They’ll tap into the brew on Saturday, April 20th at the anniversary celebration at the Wingman Brewers taproom. “We’re super excited to be celebrating 8 years of business and so very thankful for all those who have supported our little brewery since its inception in 2011,” says Ken Thoburn of Wingman Brewers.

“The beer is called Fortune Teller because we used paper fortune tellers to pick out the ingredients,” says Thoburn. “With so many brewers involved, we figured to avoid a ‘too many cooks in the kitchen’ type scenario we would just leave the deciding of ingredients up to chance. After sourcing the ingredients locally (All Washington State), as a group on the brew day we decided how much of what ingredients to put in the recipe to make a deliciously special beer.” 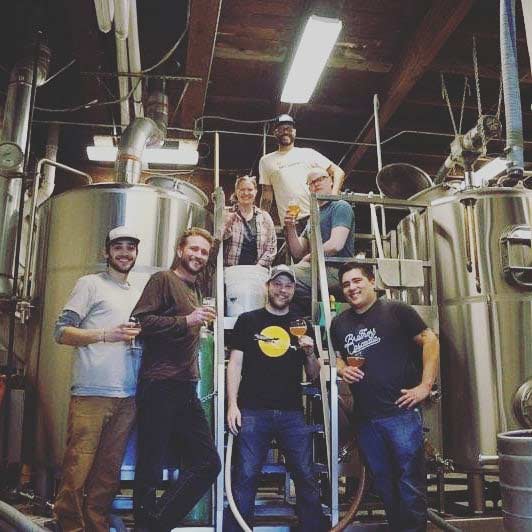 Sirius Wood Fired Pizza will be at the Anniversary celebration serving up hot pizza pies.
There is no entry fee and if you buy a beer you’ll get a commemorative glass.

All month and beyond, Gig Harbor Brewing celebrates its 4th anniversary
Anderson Valley Brewing changing ownership, remaining independent
Is Seattle one of the best beer cities in America or not?