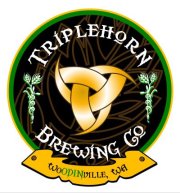 Update, Aug 8th. NOTE – The address originally reported was incorrect. I have made corrections in the original post below. The address is 19510 144th Ave NE #E6. Map.

Not long ago we toured the Woodinville beer country (read it). Once known for little more than its wineries and its extremely bitchin’ hardware store, Woodinville is rapidly gaining notoriety as a beer destination. Today we received word that yet another brewery is coming to Woodinville: Triplehorn Brewing Company. The new brewery is scheduled to open on Saturday, August 25th.

According to the company’s Facebook page, “We are a Craft Brewery, and as such, we are not subject to mass production of watered down cereal. We take pride in each and every ingredient we put into our beer. We care, we live, and we share the spoils of our desires. When we are successful, our friends are among us to reap the benefit. As we grow, we want to grow prudently, with honor. ”

Here is the press release we received today.

IS THERE ROOM ON THE EASTSIDE FOR ANOTHER CRAFT BREWERY?

…Of course there is!

Woodinville, WA, August 6, 2012: When two brothers set sail for new horizons, what could be on their minds? Beer, of course! Woodinville’s newest craft brewer opens August 25th. They’ll be recruiting beer loving barbarians for their Horde at Triplehorn Brewing Company! If ever you wished there was a fresh malty beverage just around the corner, take solace knowing you can find them open 7 days a week!

Enjoy a pint in the newly constructed Taproom. Take home a 64oz Growler. Enjoy the atmosphere with friends and family! They will be offering a full spectrum of artisan beers; A dry hopped IPA, Nitro Milk Stout, Pale Ale, Apricot Wit, and hosting other local brewers on their multiple taps! The experience is interactive, allowing beer lovers to view firsthand the brewing process, while enjoying one of the many brews on tap! Come join them at: 19150 144th Ave NE Suite E6 in Woodinville.