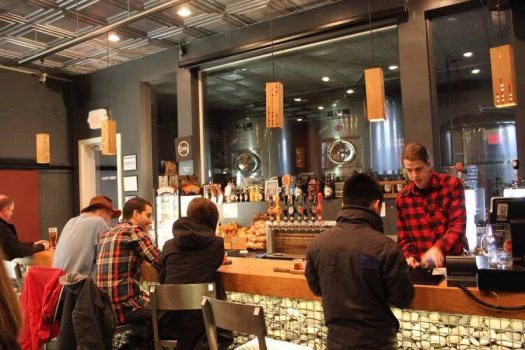 This is the first of two stories we recently posted about Vancouver’s booming beer scene on our beer-travel blog: GoFindBeer.com. We’ll post the other one here on the Washington Beer Blog as well, or you can go find it on GoFindBeer.

(originally posted on Feb. 4, 2015) In early 2013, British Columbia changed their liquor license laws for craft breweries. In the short time since, Vancouver’s craft beer scene has been booming. As in other cities, breweries are concentrating in industrial parts of the city, close in for neighbors to call it their local, but where the leases are cheap and landlords are amenable to the production industry that breweries are.

In Vancouver, that neighborhood is East Vancouver, normally nicknamed East Van, and now taking on the new brewing-oriented moniker of “Yeast Van.” There are now a plethora of breweries just east of Downtown Vancouver, many of them in two clusters, each close enough for beer hiking from one to another.

On a recent rainy weekend, we paid many of them a visit. Compared to the U.S. brewery start-ups we’re familiar with, most of the breweries seem extremely well funded right from the get-go. They purchased new, large brewing systems, ordered plenty of tanks, hired experienced brewers and devoted time (and money) to developing their brands as well as their brews.

Of the breweries that we visited, only two, 33 Acres and Main Street Brewing, serve a small menu of food. Mostly they are pure taprooms with growler fills, pint sales and taster trays galore.

Bomber Brewing – 1488 Adanac Street. Open just a year, Bomber Brewing is a comfortable addition to the Commercial Drive area. Their line-up is the stark opposite of Storm, very traditional. We particularly enjoyed seeing a Marzen and Pilsner on the tap list, and their IPA is top notch.