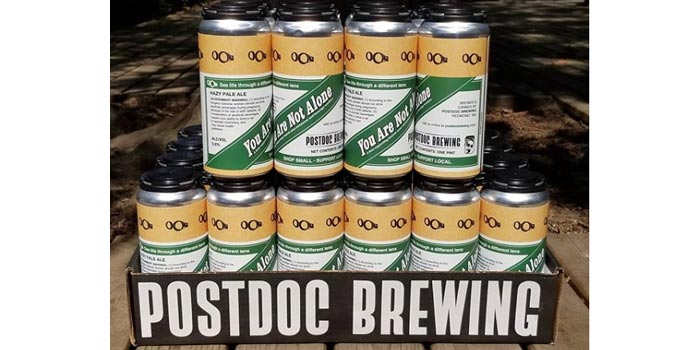 Postdoc Brewing releases its version of this philanthropic brew today, other breweries to follow

Today, Postdoc Brewing in Redmond, Washington releases its version of You Are Not Alone, a beer brewed to support struggling workers in the food and beverage industries. The plan was hatched by Reuben’s Brews, as we reported back on April 2nd. At that time, Reuben’s put out the call, challenging other breweries to follow suit and brew their own version You Are Not Alone.

At that time, a couple of other breweries had already committed to brewing the beer. There are now a total of nine Washington breweries creating their own version of the beer (listed below). Proceeds from the beers benefit Big Table, an organization providing support for workers impacted by the pandemic shutdowns.

“In these new and uncertain times, we wanted to join the movement started by Reuben’s Brews and reach out to our community to remind everyone that You Are Not Alone,” said Postdoc Brewing on Instagram. “We at Postdoc are still working to bring you a taste of normal life and spread some happiness and joy.”

Like so many other breweries in the state, and across the country, Postdoc Brewing is operating in a strangely discombobulated world because of the pandemic shutdowns. The brewery remains open, offering online ordering and to-go sales, but has suddenly lost its other sources of revenue. It is impressive that Postdoc, and the other breweries involved, are stepping up at this time of need when they themselves are scrambling during these challenging times.