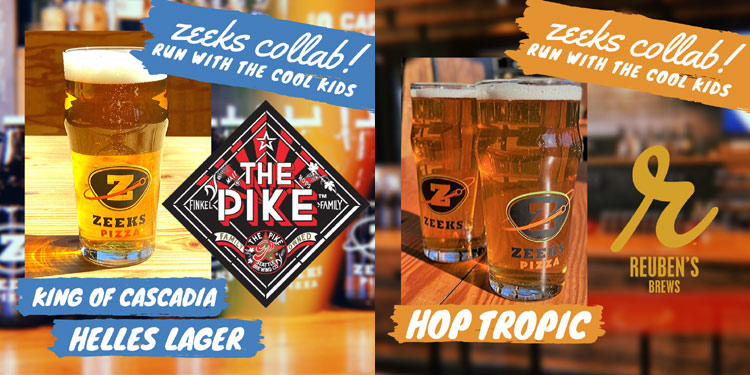 Zeeks Pizza, the local chain of pizza restaurants with an uncommon predilection for craft beer, is understandably proud of the collaboration beers they’ve brewed with some of Western Washington’s best-loved breweries. They want to spread the word about this collection of specially crafted brews and the program that brings them to life.

Because Zeeks has multiple locations, they are able to secure entire batches of these beers, which is why they are exclusive to Zeeks. And because of their “everything on tap delivered” policy, you can get those beers delivered to your front door – from any of the Zeeks locations around the Seattle-Tacoma area.

Beyond the collab beers, your local Zeeks probably has some other very tasty stuff on tap for you. Look at the Bellevue location’s tap list from a recent Instagram post, for instance.

As we’ve reported since it began in 2017, Zeeks Pizza led the way in terms of beer delivery. A number of breweries and other businesses are doing it now, but Zeeks started doing it long before the current circumstances arose, offering a lovely selection of cans, crowlers, and growlers delivered to your door. It ain’t no thang. Delivering awesome beer along with their pizza is Zeeks’ groove.

My advice? Get the Hop Tropic IPA and pair it with the Cherry Bomb, a tomato-based pizza with Mama Lil’s Peppers, Italian sausage, parmesan, and fresh basil. The beer adds another, fruity dimension to the pizza. Some sweet to the heat.

Back to the collab beers. Behind the scenes at Zeeks, Tommy Brooks is the resident beer geek who steers the companywide beer program. Short version, Tommy geeks out with the brewers to determine the beer style and some basic parameters, then he lets the experts go to work. The results speak for themselves. Hop Tropic, for instance, the “house IPA” brewed by Reuben’s Brews, has won some impressive awards, which is not an easy thing to do with an IPA these days. (Lots of competition in that category.) A restaurant’s “house beer” bringing home medals? Unheard of!

Anyway, here’s the lineup of collab beers available only at Zeeks, and available in the privacy of your home thanks to their delivery service. You can order beer and pizza by phone, via the website, or by using the Zeeks app.

Hop Tropic (6.2% ABV / 42 IBU) is the undisputed heavy-weight champ of Zeeks collab beers. Made by our closest brewing partner, Reuben’s, it has too many awards to mention and is unquestionably one of the best IPAs in the NW. When in doubt, order this. It is our house beer at Zeeks and is always on tap. Try and find a better house beer anywhere. We’ll wait…

Pike Brewing Helles Lager (4.9% ABV / 22 IBU) is a 3-way collab between us and our friends at Pike Brewing and PCC Natural Markets. 5% of sales goes to Long Live the Kings, a group that works to restore wild salmon and support sustainable fishing in the PNW 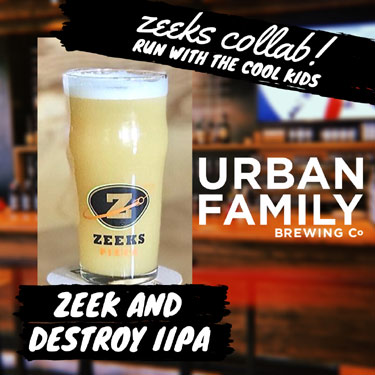 Urban Family Zeek & Destroy (8.0% ABV / Minimal IBU). None of our collab beers have gone from unknown to legendary faster than this one. People (including us) freak over this beer. It is definitely already in the Zeeks Collab Hall of Fame which is totally a real thing. Anyway, don’t let its easy drinking ways fool you. The Force and alcohol are strong within this one and treating it with respect is advised, Skywalker. 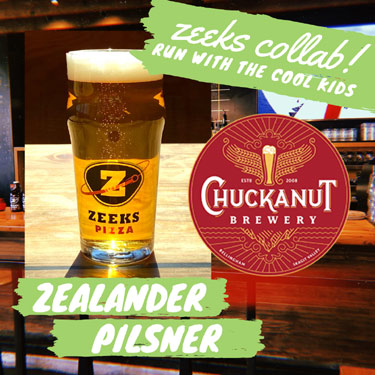 Zealander Pilsner (5.0% ABV / 38 IBU). New Zealand grows unique hops (Rakau & Wai-iti) that give their beers a distinctive flavor. We like this beer because it is crisp and refreshing and great for sunny days. Pilsner is also one of the best beer matches for pizza. We teamed up with our friends at Chuckanut Brewery on this one because they are among the best at Lager style beers (Pilsners are lagered). Don’t outthink this one. It is easy drinking and widely appealing. Chuckanut is a brand people know and love. Order with confidence and keep everyone happy. 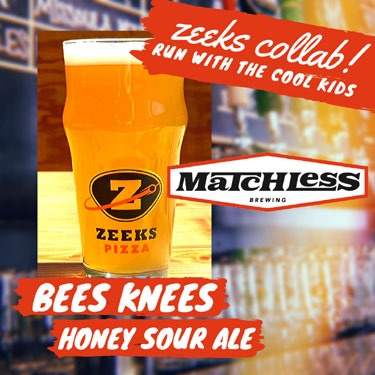 Bee’s Knees Honey Sour (5.0% ABV / 100 GBU) The guys at Matchless Brewing are full on gangsters when it comes to brewing beer. We’ve known these guys for a while and love them.  We bought their first keg when they started brewing commercially. They are known for their IPAs and lagers, but they also produce some of the best sours in the PNW. We know, we know – sours can be scary or sound weird to non beer-ninjas. Take a deep breath. Zeeks is all about accessibility and bringing awesome beer to regular people. If you are going to be adventurous, Zeeks is the place to do it and this is an excellent choice to expand your horizons. Drinks like a cocktail (thus the GBU – Gin Botanical Units above) and is a refreshing choice on a sunny day.