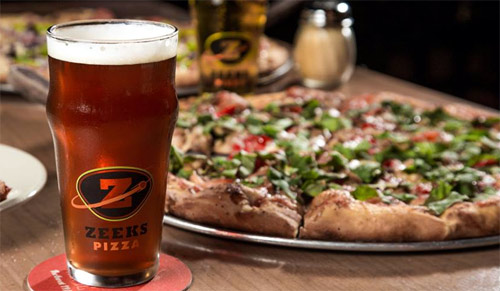 Zeeks Pizza, the Seattle-based pizza chain, is staged to open a new location in Tacoma, it’s first venture into the South Sound region. Like the company’s other locations, there will be a strong commitment to great beer at the new Zeeks. Below we share the opening beer lineup as well as information about the grand opening celebration, which will serve as a fresh hop ale tap takeover. (Picture above from Zeeks Facebook page.)

The Tacoma Zeeks Pizza location is at 1702 Pacific Avenue in downtown Tacoma, the former home of Elemental Pizza. (See map.) From there, the company will deliver pizza to most Tacoma neighborhoods.

The soft opening is Monday, August 27th and the official grand opening is Saturday, September 15th. They will not offer beer delivery straight out of the gate, like they do at other locations, but stay tuned.

The opening day lineup includes a strong focus on beers from the South Sound. The following hyper-local brews will be on tap for the opening, along with the regular beer menu (see menu below):

Grand Opening Fresh Hop Tap Takeover – September 15th at 3:00 PM, Zeeks will tap into an assortment of fresh hop beers.  Because of the nature of fresh hop beers being dependent on mother nature, this list is subject to change. So far they are hearing good things. They’ve invited some friends from the breweries to join the party and talk about beer, so this is an opportunity to meet the folks behind the beer. Here are the fresh hop beers you can expect to find on tap.