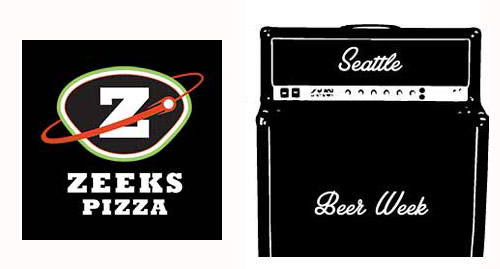 Seattle’s own Zeeks Pizza is the most-Seattle pizza joint that Seattle ever Seattled. Not only do they offer a great selection of local craft beers on tap at their restaurants, but they’ll also deliver beer to your door when they bring you that large pepperoni, mushroom, roasted garlic, and pineapple masterpiece. No surprise, they’ve got plans for Seattle Beer Week. Here’s what’s up.

Zeeks turned 25 last September, and they are enjoying our mid-20’s. So they’re celebrating by offering 25% off beer delivery during SBW.

Monday, May 13th
Get a Zeeks Pizza for only $15. Any size. Any pizza. The deal is a regular offering on the first Monday of the month if you are having your pie delivered to the Beveridge Place Pub. This particular Monday is not the first Monday, but they’re extending the offer to coincide with a Seattle Beer Week event next door at the Beveridge Place Pub: This is Washington, Damn it! The pub will have 35 Washington-brewed beers on tap for $4 per pint.

FOOD SPECIAL: $10 off any large pizza with purchase of any Bale Breaker beer.

EVENT DETAILS: We met Single Hill shortly after they opened their brewery and taproom in Yakima, and it was love at first sip. We are stoked to be hosting them for their first multi-tap Seattle. Single Hill is not yet distributed regularly on the west side of the mountains, so take advantage of the opportunity to check out Single Hill’s delicious beers while you can in between trips to Yakima.

FOOD SPECIAL: $10 off any large pizza with purchase of any Single Hill beer.

Cerveza (blonde): Hopped to promote balanced, fresh and fruity hop flavors without the bitterness. Great as a break from hoppy beers or to enjoy with a few slices! Chinook, Centennial and Comet hops. 5.5% ABV  // 25 IBU