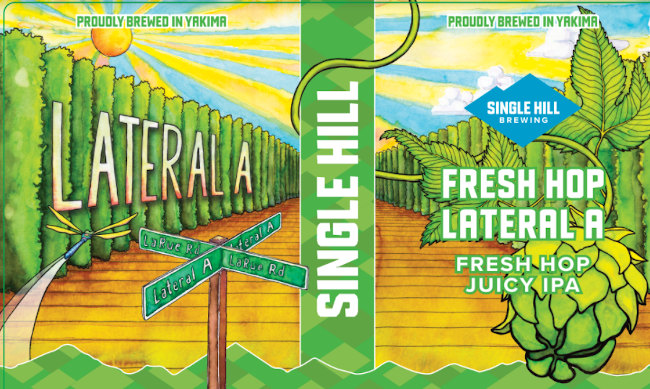 By now, nobody should be surprised to learn that Zeeks Pizza has big plans for fresh hop beer season. It’s the kind of thing they do. The local chain of pizza restaurants, which I’ve described as a chain of great beer joints with a pizza problem, has been working on fresh hop collaboration projects and otherwise getting some killer stuff lined up for you.

To begin with, now through the end of October, Zeeks is serving Fremont Brewing’s Field to Ferment, available in-store by the pint, or get growlers and crowlers delivered to your door. On October 8th, Zeeks will begin selling six-packs of Fremont’s much-beloved Cowiche Canyon Fresh Hop Ale.

Zeeks also worked with Varietal Beer Company on a fresh hop collaboration project, as Tommy explains. “I went out there and brewed the first batch of Everything Is Blossom (Simcoe) with Varietal a couple weeks ago. We went to Carpenter Ranches and met Jeremy Rojas who provided us with the beautiful Simcoe hops. A 20-minute drive to the brewery and we got started on the brew.”

Everything Is Blossom is not a typical fresh hop beer; the hops are not the only hyper-local ingredient in the beer. “While brewing, Ron Newhouse from Newhouse Dairy in Sunnyside stopped by,” says Tommy. “We ended up chatting a bit and hanging out for beers later in the afternoon. Really cool guys doing innovative work: Newhouse is growing grain for local brewers to use, and his grain is in Everything Is Blossom. It was malted at LINC Malt in Spokane. Both the grain and hops used in this beer couldn’t be more local, which is cool.”

The first version of Everything Is Blossom—the Simcoe version—will be available starting this weekend and will last until it is gone. The second version, brewed with fresh Citra hops, is slated for release on October 8th. That second version finds its way into aluminum cans for your convenience and enjoyment. So let’s breakdown the schedule.