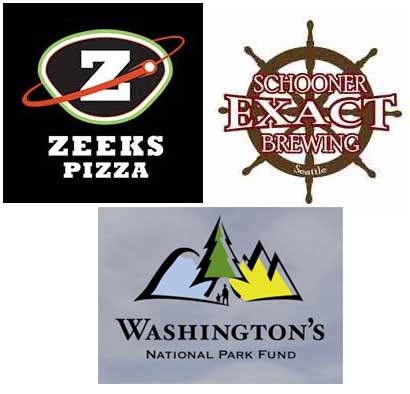 Zeeks Pizza recently announced that it teamed up with Schooner Exact Brewing to create a new Double IPA. Proceeds from the beer will benefit Washington’s Natural Park Fund, with 5 percent of the sales donated to the cause. Hamma Hamma Double IPA is out there right now, available at most Zeeks locations around Seattle.

The beer is related to Schooner Exact’s popular Evergreen IPA and is described as that beer’s big brother. Hamma Hamma Double IPA was brewed with Pale, Crystal, Munich and Rye malts, with the hop character coming from the aggressive use of Simcoe and Amarillo hops.

Although you can drink it right now, Zeeks will host the official release party at the company’s Queen Anne location on November 10th at 5:30. This special release is guaranteed to run through December.

Schooner Exact and Zeeks Pizza have been friends for many years. When they decided to collaborate on a new beer exclusive to Zeeks, Tommy Brooks, Zeeks Director of Operations, got together with Schooner Exact’s owner Matt McClung to create the recipe. They decided to name it after Hamma Hamma Falls in Olympic National Park.

“The idea of partnering with Washington’s National Park Fund came to me after reading about how our national parks are losing funding, which is absolutely tragic,” said Tommy Brooks, Zeeks Director of Operations.

“We needed a name; a unique name,” said Brooks. “We threw a dozen or so pretty bad ideas back and forth until one morning it dawned on me it would be cool to tie it to the hop profile of the Simcoe hops used in the beer and grown in the Northwest.”

“I think Zeeks is in a unique position to help out in a meaningful way. The beer is being poured at up to 13 locations, and what is cooler than drinking good beer for a good cause? Zeeks is very much a local, Northwest company tied to the communities we operate in, and partnering with Washington’s National Park Fund just made a lot of sense.”